Home
FOX
Gotham Review: “Our Deaths and Beyond” 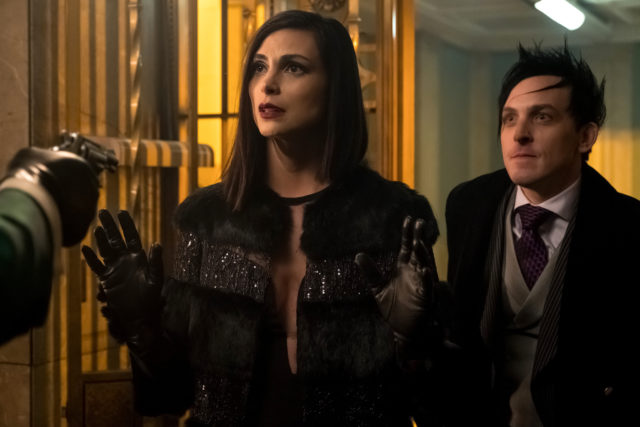 I’m not sure if my frustration with this week’sÂ GothamÂ was personal, or justified based on the story. There’s only so much compelling story that can be told about Nygma fighting against his inner Riddler. The Ra’s Al Ghul story is extremely tired, and the most compelling story they’ve told this season was nowhere to be found (Joker). I’m starting to believe thatÂ GothamÂ is trying to push things into the show it wants to be, rather than embracing the show it is.

It’s really to easy to see thatÂ GothamÂ is trying to force things here. They brought back Ra’s Al Ghul from the dead, and he spouted some nonsense in the episode about seeing some chaos coming to Gotham City and wanting to make Bruce it’s protector. Wow! Where have I heard that before? Every Batman film ever? Snooze! We get it. Bruce Wayne is important. It’s almost like he becomes a superhero or something. It was much more impressive ofÂ GothamÂ to kill off Ra’s Al Ghul, keep him dead, and tell a new story. New stories are compelling. Retreads of stories about Batman’s origin are not. I definitely prefer Barbara as the Demon’s Head.

Just as silly as the contrived “let’s make Bruce Wayne into Batman as a teenager” is the villains with differing agendas turning on each other. It’s clear that Nygma and Lee have some sort of grudge against Butch and Penguin, but it’s not clear what. What is clear is that the show is still forcing the “Nygma versus Riddler” internal conflict, but it’s getting really old. I don’t mind character focused episodes, but episodes that choose to deep dive into characters and their conflicts should actually tell us something.

This episode wasn’t totally without redemption, though. There were two arcs that made it worth watching, even though the rest is inherently skippable:

The first is Alfred, Bruce, and Selina teaming up with Tabitha and Barbara to steal the knife to try and put Ra’s Al Ghul back in the grave. I don’t agree with bringing him out of the grave, but watching these 5 in a team up was really something special. If nothing else, we got to see Alfred and Tabitha pretend to be a couple. It’s the little things.

By FAR the most compelling arc in this episode was that of Lee Thompkins. They beat you over the head with the fact that she’s using Ed’s schoolboy crush to manipulate him into robbing banks, and it’s also clear that she wants the money to help the people of The Narrows. Morena Baccarin’s portrayal is compelling at every turn, and even more compelling is her interactions with Jim. Having him arrest her the end was such a strange experience that I absolutely couldn’t stop watching.

Overall, I was underwhelmed.Â GothamÂ was not playing to its strengths here at all, which is frustrating since it has so many strengths.

What did you guys think? Do you agree? Let us know!

Gotham Season 4 Episode 19 Review: "A Dark Knight: To Our Deaths and Beyond"