Home
Gotham
Gotham Review: Eat “One of my Three Soups” 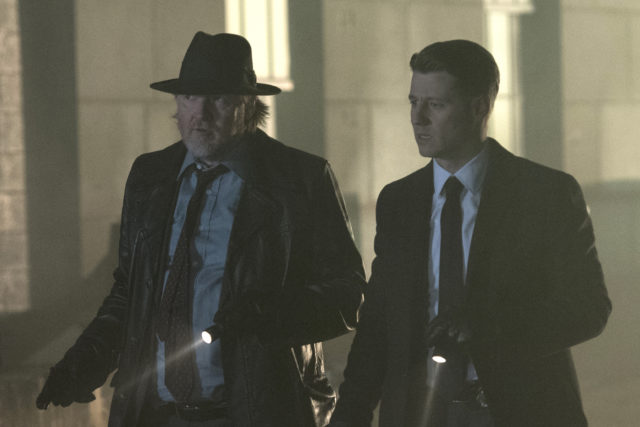 GothamÂ has had an up and down season so far. Some of the highs have been quite good, while other moments did a lot of wheel spinning and killing time. “One of my Three Soups” was decidedly the former. It threw Jim and Harvey back into action together, it told us more about Barbara and how she fits into things, and it put three compelling villains out there to keep the police and Bruce Wayne busy.Â One ofÂ Gotham‘s greatest strengths is its villains, and releasing three of them at one time brought with it an overall excellent episode.

Let’s start there, the villains. We welcome back Jonathan Crane, the Scarecrow, Jervis Tetch, the Mad Hatter, and Jerome Valeska to Gotham City in this week’s episode. Supposedly Jerome is not the Joker, so let’s just call him Jerome for right now (we find out in next week’s episode….I think). These three villains have givenÂ GothamÂ some of its best, most compelling material, and releasing them from Arkham all at once raised the stakes to perhaps a season high. I think most of the Jervis Tetch stuff had been compelling last season, so bringing him back to “distract” Gordon while Jerome worked on something was a welcome change of pace from the misadventures of Jim and Sofia Falcone. Bruce, meanwhile sought out Jerome for what turned out to be a foreshadowing moment in which Bruce saves his enemy’s life, as Batman is wont to do. Having Jerome and Tetch in the same episode really gave this episode a punch.Â GothamÂ is at its best when it leans into the wacky villains.

I’m really glad that the Jim/Harvey feud is over. My love for this show is built on the relationship that Donal Logue and Ben McKenzie have carefully crafted. Their relationship in this episode feels both classic, since their relationship was at the foundation of the show from the beginning, and fresh, since they recently reconciled. Their mutual respect for each other has grown deeper, as Harvey knows Jim is willing to get his hands dirty, and Jim no longer looks down on Harvey for being morally flexible. With any relationship, sharing of secrets and open honesty breeds trust, which becomes clear in the show’s primary buddy cop relationship.

I’ve said this in plenty reviews prior and I’ll say it again: Erin Richards is a gem. I’m not sure that the show knew what to do with Barbara at the start of this season, and she’s bounced around from being Ra’s Al Ghul’s main squeeze, to an arms dealer for Sofia, and back to the coy club owner that we’ve grown to love. Now, however, she figures out that she’s been chosen as Ra’s Al Ghul’s replacement, which eventually comes with its own female warrior entourage. That’s pretty sweet. Richards has been excellent at playing evil Barbara and I’m hopeful that with this new story comes more opportunity. It was still my third favorite part of the episode, but this was overall a pretty strong one.

I’m overall very pleased with this episode ofÂ Gotham.Â I don’t know that they always understand their strengths, but this episode played to them very well.

Gotham Season 4 Episode 15 Review: "A Dark Knight: One of my Three Soups"

Jim and Harvey track down some escaped villains who are terrorizing the city on this week’s strong episode of Gotham.