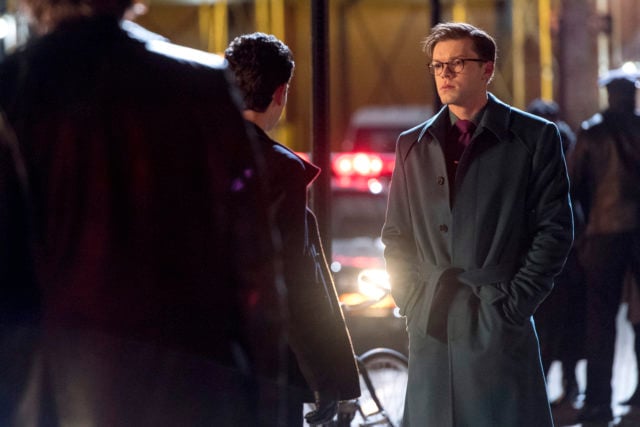 Welp. I called it.

Honestly, I didn’t expectÂ GothamÂ to immediately drop the Joker on us. I thought maybe an episode or two would go by before they reintroduced Jeremiah Valeska and finished their workaround. I think that probably would have worked better. What we have in “That’s Entertainment” instead of a nuanced, well-told origin story is a half-hearted attempt to involve the Joker in the devolution of Gotham City. The villains are teaming up and Batman is rising, so in order to do that, the Joker must exist. I’m glad he finally does, so that maybe we can move away from the half-baked origin story and into whatÂ GothamÂ does best: putting their balls to the wall and telling crazy stories.

I didn’t think much of the Barbara story either. I love Erin Richards and think she’s a fantastic actress, but making her Ra’s Al Ghul’s heir really doesn’t make sense to me. I find it likely that this week’s story was contrived just to pit her against Tabitha, who will inevitably join up with Penguin and Butch, or the Gotham City league of villains. Don’t get me wrong, because I’d love to see that, but right now it feels contrived.

Essentially, that’s my attitude about this episode in a nutshell. All of it feels contrived and manufactured because of where they’re trying to go, or at least assuming that they’re trying to go somewhere. It’s a big positive that we now have the Joker, but this particular episode only existed to work around what showrunners had previously said about Jerome not being the Joker, and create a new Joker in time for the rise of Batman. Jeremiah was completely contrived just for the purpose of the showrunners working around this, but still getting Cameron Monaghan to play the Joker after proving he’s so good at it.

There are a couple of advantages to this approach. Number one, it allowed them to kill off a character. Fish Mooney and the gangsters have gone down over the past few seasons but being able to kill Jerome was helpful in keeping the stakes high for the show. The Batman story doesn’t really allow for many characters to die, but killing Jerome worked well for the most part. Part of it still felt hollow, because of the aforementioned work around.

The second major positive is that we still get to see Cameron Monaghan play The Joker on a continued basis. His take on Jerome really fit the Joker mold. He’s been an asset to the show in his limited appearances, so locking him down into that character for the remainder of the show can only be a good idea.

Overall, this episode couldn’t distract me from the fact that it felt contrived and forced. I’m glad we have Cameron Monaghan in the longer term for the show, but only if the show lasts, I guess.