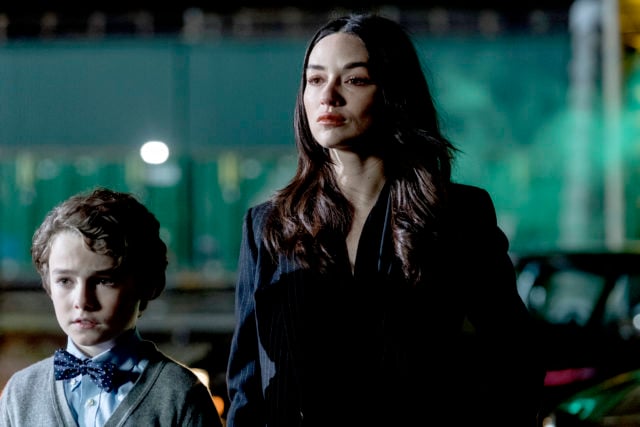 Something that I have been wondering aboutÂ Gotham for most of this season is what exactly Sofia Falcone is playing at. It’s always been clear that she is a master manipulator, but until this week’s episode I never had a good sense of whose side she was on or what angle she was working. Those motives have become clearer in “Things That Go Boom”, alliances have now shifted andÂ GothamÂ is now facing a war for the status quo and unholy alliances to make it through. Some of Sofia’s hand has been played, but other people (like Gordon) think that there are bigger fish to fry.

I’ve enjoyed Sofia’s presence on the show thus far, and Crystal Reed is doing a masterful job playing her. That said, I had no idea of her true intentions in Gotham City until this week’s episode. It seems pretty clear that she wants the Falcone family back in power, and she has actual romantic feelings for Jim Gordon. Of course, as she’s proven her skills at manipulation, this could be muddier than this episode let on. She also cares about orphans like Martin, who she thinks went “Boom” at the end of the episode. Though Sofia was spurned by Gordon and betrayed by Penguin and Martin, she has found a new girl power squad with Barbara, Selina, and Tabitha, who follow her through the promise of power in Gotham’s new world order post impending war. It was about time for a shake-up, so I’m excited to see how Jim’s two former flames take charge of this group of lady fighters.

So far I’ve enjoyed the Professor Pyg story, as it’s been one of the higher stakes storiesÂ GothamÂ has told in some time. Turns out, Pyg has some weird obsession with being ranked among Gotham’s all-time crazies. When Gordon tells him he’s nothing compared to the Jerome Valeska’s of the city, this does not sit well with Pyg and he escapes Arkham Asylum pretty darn easily. I’m not going to lie, I was excited when I thought the Pyg saga had ended with his arrest, because the story had been the right length. It didn’t drag but it went long enough to really explore the story and the stakes associated with it. Letting him out of Arkham this early gives me mixed feelings. His story thus far has been excellent and I’m eager to see where they take it next. Conversely, at what point doesÂ GothamÂ beat a dead pig? The escalating war in the city feels like the much more important story, but I won’t be counting any pork loins before they’re slaughtered.

Finally, I am compelled to mention the best underworld leader that Gotham City has ever known: Lee Thompkins. She’s made a quick transition from in house doctor to leader by offering medicine in trades with other groups. Of course, it doesn’t hurt that she has re-ignited super genius Ed Nygma/The Riddler on her team, along with enforcer extraordinaire Solomon Grundy. So far the Thompkins-era underworld is running smoothly and is a fun story, but now that Nygma’s alter-ego has been awakened, there’s only a matter of time before bad things happen.

Overall, I enjoyed this episode ofÂ Gotham.Â It did feel like it was setting up something more, so judging it on its stand-alone merits doesn’t seem prudent. Still, the characters are strong and they’re a joy to watch. Plus, there was nothing from Bruce the rebellious partying teen, so that’s good.

Sofia’s relationships crumble and her motivations come to light as Gotham prepares for war in its latest, solid episode.