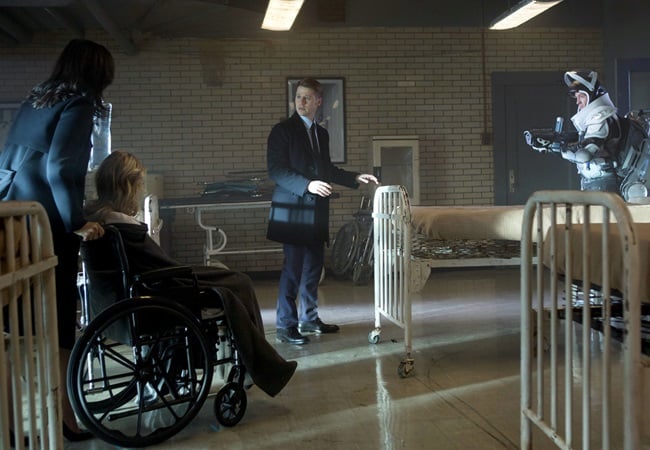 After a powerful return in last week’s episode, this week’s Gotham was another solid follow-up despite its oddly fast pacing in the storyline between Mr. Freeze and Hugo Strange.

I will admit that as terrifying and creepy as the whole Indian Hill plot was in this week, I was left mostly confused and I get it, that’s the point because it’s too early to give away all the answers this soon in the season. But at the same time, it felt like they are trying to accomplish two major things that may not necessarily come all together at the end. From what we see here, Dr. Peabody is using a “rehabilitation” method on Penguin that is the complete opposite as it turns you crazy instead of getting you better.

Just as a side note: Peabody came easily off as a classic cheesy villain the minute she laughed maniacally that really deserved the reaction “really?” I totally get why from their perspective, this method is supposed to be seen as a way to make your criminals or mentally unhealthy patients look like they are all better by behaving. But at the same time, wouldn’t the public catch on very quickly to the fact that this method is basically one way of frying these people’s brains? I will give them credits for keeping me intrigued because there is another question to look into: what if turning these people crazy, is more useful than we realize? I just didn’t see any connections that necessarily ties into what Indian Hill is all about.

The way I looked at Penguin last season as the show’s breakout villain and character in general, is how I’m looking at Strange because he is so darn slick and deliciously intriguing. Even though it probably wasn’t a intentional nod, I liked Strange’s outfit at the start which reminded me a little of how he was drawn in Batman: Arkham City. While I was definitely compelled by Strange getting Freeze after all: I just felt that they got to this point way too soon. Also, unless they are just pulling a huge twist here, it appears that this version of Mr. Freeze’s origin story won’t have a Nora that is cryogenically freezed for years.

Although this is a comic book show and Gotham has certainly pulled weirder twists before so who knows, maybe somehow her cracked frozen body is something you can put back together – although just typing and saying it out loud sounds way insane than it is. Regardless, as powerful as the performances and scenes were, I wish we weren’t already at the stage where Strange has captured him. At this point, I guess I just have to accept (which isn’t a problem in this case) that Gotham is truly a Elseworld story of the Batman mythology where maybe in 10-12 years from now, the reason Batman even comes to life is because that all these famous villains will have taken over the city.

Overall, despite some pacing issues that can get problematic later in the season, “A Dead Man Feels No Cold” was a strong episode, that again, made me forgot about Leslie, Bullock and Jim at many points throughout it. I did appreciate the side-plot with Bruce as he continues to develop into the man we know he will become one day.

Jim and Leslie goes up against Mr. Freeze who demands to get his wife back in this week’s powerful episode of Gotham.