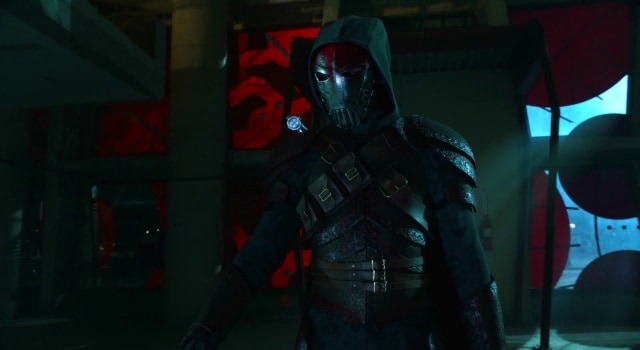 Gotham returned this week from its final hiatus (thankfully) as we begin to get to the end of this second season and this week’s episode finally unleashed one of the big promises that we got for Season 2: the arrival of DC Comics’ and major Batman player, Azrael in a different interpretation.

As someone that is fascinated with the character of Azrael from the Batman storyline “Knightfall” (as well as “Knightquest” and “Knightsend”) and the Batman Arkham games, I was really stoked to see how Gotham would interpret this character in the mythology that they have established for the past two years. Azrael, whose name is Jean-Paul Valley, comes into the lore at a very specific point in Batman’s career so to introduce this type of character without the actual Dark Knight was a risk. Having Theo Galavan being resurrected and turn him into Azrael worked for me, to a certain degree. First off, I absolutely loved Hugo Strange in the episode because seeing him geeking out in the most evil way ever, was just outstanding. They really got the perfect Hugo Strange by casting B.D. Wong as he continues to be so deliciously evil.

They did a really nice job with bringing the Azrael suit to life which was a solid adaptation and just overall an easy costume to see on the screen. The one thing that may have been a little letdown with Azrael was that they didn’t really keep him as a mystery for the city. The Azrael that I’m more acquainted with from the comics and video games, is almost a myth, a mysterious figure that you don’t know exists or not. Although, since Theo is most likely not going to be the definitive Azrael for this universe, I could easily imagine someone else picking up the mantle of Azrael after Bruce does become Batman several years from now. I guess I was just expecting them to let this Azrael be a bit of a mystery to Gotham City for at least an episode or two as we get to the season finale. It wasn’t a deal-breaker for me in any way because I really did enjoy how he was handled. Both Penguin, Tabitha and Butch discovers that he is alive so I’m definitely looking forward to see how those encounters will be like when Azrael sees them again.

We see Barnes and Gordon just butting heads a lot in this episode which was getting to the point where it was just an eye-roller. The thing that was hilarious though was that Barnes wouldn’t mess with Bruce as he wouldn’t yell at him, heck, he even was so nervous about getting on Bruce’s bad-side that he referred to him as Mr. Wayne. I don’t know how I didn’t pick up on it earlier that something was going to happen to Barnes as Azrael stabs him during their encounter. The only thing that I wasn’t sure about by the end of this episode was whether or not Barnes actually died. It looked like that he passed away as Gordon was trying to keep him alive till help arrived, but wouldn’t he have been a bit more shaken up when he was chatting with Bullock, if Barnes was dead? It was just really odd that they didn’t make it clear if he was dead or if he had gotten help, given that he is a main character on the show.

While it didn’t fit in with the overall Azrael story of the episode, Eddie was keeping himself quite busy at Arkham Asylum as he tries to find a way to get out of there. However, he does discover Hugo’s Indian Hill project which must have the worst security and locks that I have ever seen if he was just able to break in through pick-pocketing a key lock. Something tells me though that Eddie will regret that he ever discovered it. Overall, “Azrael” was a very strong episode that did a solid job with introducing their version of Azrael and with only three episodes left of the season: things are starting to come full circle nicely.

Gotham airs on Monday nights at 8/7c on FOX.

The huge Batman character Azrael makes his debut in this week’s episode of Gotham as the latest threat to Jim Gordon.