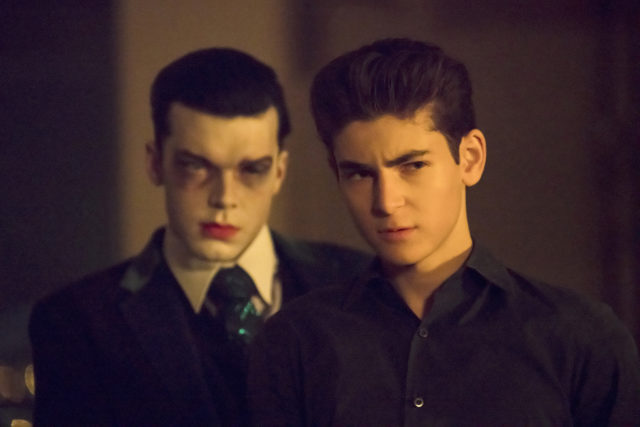 In the past few years, what I’ve come to expect fromÂ GothamÂ finales is something wild and unapologetic. Thankfully, Season 4 fits that mold. After an overall frustrating, wheel-spinning season, Season 4 finally got things together over the last few episodes and ended with a (quite literal) bang.Â GothamÂ is at its best when it uses the comic-book villains in the zaniest ways possible and doesn’t apologize for killing characters from the Batman era. “No Man’s Land” brough plenty of death, exciting moments, and a good starting point for ending the show in Season 5 (que sad face).

I’m still riding the high from watching this episode, and I haven’t been able to say that aboutÂ GothamÂ in a long time. It was exciting at every turn, and the stakes were higher than they’d been in some time. Jim’s torturous encounter with Ed. Selina visiting the hospital. The Butch/Tabitha/Penguin saga. Ra’s Al Ghul. Everyone of those many stories involving many characters was every bit as exciting and emotionally deep as the next, making “No Man’s Land” possibly the best episode ofÂ GothamÂ in the entire season.

Let’s talk about a few of those aforementioned plots, starting with Jim’s encounter with Ed. Ed became jealous because he saw what we all see (when they finally put Jim and Lee back on screen together, that is) in that Jim and Lee still have heat between them. It’s refreshing to finally see growth for the both of them, after his stubbornness pushed her away and her unwillingness to see Mario for what he was pushed Jim right back. Jim’s admission that he has made mistakes and the kiss between the two of them was immensely satisfying, and really felt true to the characters. I don’t know what exactly is going on in her head when it comes to Nygma, but I tend to think that Jim (who said he’s being used) is correct. But the Romeo and Juliet style stabbings do suggest otherwise.

One of my favorite things aboutÂ Gotham has always been wacky team ups between characters. To stop Jeremiah and Ra’s Al Ghul and save the people and city they love, “No Man’s Land” gave us a team up consisting of Penguin, Tabitha, Barbara, and Alfred. When this team arrived to fight Jeremiah and Ra’s Al Ghul, it resulted in one of the most exciting fight sequences of the entire season. I’m a little surprised they decided to kill off Ra’s Al Ghul, again, but this time he ultimately got his message through to Bruce, which sets the stage as well as possible for the forthcoming fifth and final season.

Perhaps the most shocking/exciting/sad moment for me was the healing and subsequent revenge killing of Butch, at the hands of Penguin. The emotional impact of the situation really hit home because Penguin spent so much time with Butch at the end of the season, promised to cure him of his Grundy problem, has Hugo Strange cure him, and THEN kills him. It was all an extremely well executed revenge act against Tabitha, whom he reminded us killed his mother several years back (I had forgotten). This accomplishes several things at once. One, it reestablishes Penguin as a cold-blooded villain. Two, it establishes a permanent rift between the Sirens and Penguin, who will undoubtedly battle for the reign of Gotham’s underworld. Three, it gives a heartbreaking farewell to a longtimeÂ GothamÂ character in Butch/Grundy, who will be sorely missed.

This season ofÂ GothamÂ has not been my favorite in every aspect, but they revisited all of my favorite components and really made the finale work well. I hope that they will carry this momentum forward into their final season and give the fans the final season they deserve.

What did you guys think? Did you enjoy the finale? Let us know!