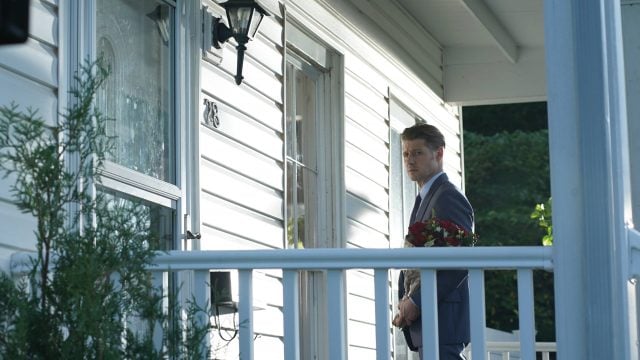 Hello everyone! Welcome toÂ GothamÂ reviews! I’m pleased to be taking the reigns on this show from capable hands and excited to be writing about one of my favorite shows for TVOvermind. The season premiere was loaded with new stories and interesting new plots for all of our favorite characters (and then some), and I’m very excited for what’s to come.

This week onÂ Gotham:Â Jim, unsuccessful on his journey to Leslie, is now a bounty hunter, bringing in escaped Indian Hill patients for cash. Penguin announces to Gotham City that Fish Mooney is pulling the strings on the escaped patients, and offered a million dollars for her capture. Bruce works to expose the corruption controlling Wayne enterprises, which proves to be difficult and ridden with obstacles.

Really, there was a lot in this episode because every character was checked in on. Of course, we checked in on some more than others, like very little Leslie, Nygma, Lucius Fox, and quite a bit of Jim, Bruce, and Penguin. I found the new story engaging and intriguing, but would’ve liked to see how things played out for a few more characters. I really want to know what Leslie is up to, or what (and who) we saw in that opening scene. Morena Baccarin is still a regular, so I guess we can expect that to be resolved sooner rather than later. Or at least, I hope so. I’m still rooting for she and Jim to get back together. But I guess you comic book purists are expecting something else, aren’t you?

I’ve always been happy (ok, since late Season 1) about the direction they’ve taken Barbara, and I’m still happy with it. Having her embroiled with Penguin and some of the other Gotham low-lifes is perfect, because she can still feasibly interact with Jim, but can also do her own weird, crazy thing that Erin Richards has been killing for the last couple of seasons. I would also look for an un-dead Jerome to weave his way into this plot somehow.

Probably the best thing about the premiere is that it insists that Gotham maintain the balls-to-the-wall craziness that carried it for the better part of Season 2. This show has always had good elements, but in the last season when they really let loose, they had a quality, engaging series. I see no signs of changing or slowing down from the premiere, which is excellent news!

Overall, I’m extremely pleased. I didn’t think it was perfect, but it asked a lot of questions that I’m eager to know the answers to, like what’s up with this controlling group at Wayne Enterprises? And how will Leslie work her way back onto the show? Will Gordon become a policeman again? I really want to know what’s up with this Bruce clone, too. The premiere asked a lot of interesting questions, that hopefully the show will answer throughout the season. I’m really excited that this show is back, and to be covering it going forward!

Jim Gordon, now a bounty hunter, attempts to bring down Fish Mooney, as we check in on every character on the Season 3 premiere of Gotham