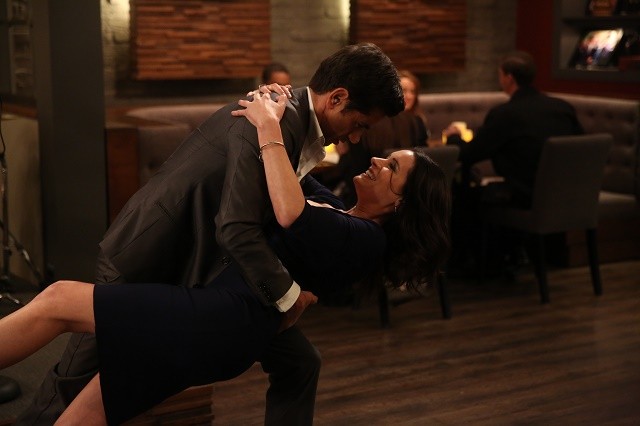 One of the very best parts ofÂ Grandfathered‘s first season has been the relationship between Jimmy and Sara. As anyone who watches the show knows, the exes were brought together after Jimmy discovered that the two of them had a son, Gerald, and ever since they re-entered each other’s lives, there’s been a clear spark between the two of them, whether they want to admit it or not. And in tonight’s all-new installment ofÂ Grandfathered, titled “The Boyfriend Experience,” that spark may become something more as Jimmy poses as Sara’s boyfriend in an effort to make an ex of hers jealous.

So what can Grandfathered fans look forward to in tonight’s episode? Well, as shown in the clips below, Jimmy and Sara will be flirting, dancing, and even getting a little handsy with each other as they try to sell the fact that they’re actually a couple.

However, is this really all just for show? As Ravi and Annalise comment in one of the sneak peeks below, Jimmy and Sara are essentially dating each other, but “they’re just too emotionally stunted to admit it.”

GrandfatheredÂ airs Tuesdays at 8:30 p.m. on FOX. Check out three sneak peeks from “The Boyfriend Experience” below:

When Sara invites Jimmy to accompany her to an ex’s party and play the role of her “boyfriend,” Jimmy realizes his feelings for Sara may be deeper than he thought. At home, Gerald and Vanessa panic about their parenting abilities when Edie starts acting out.