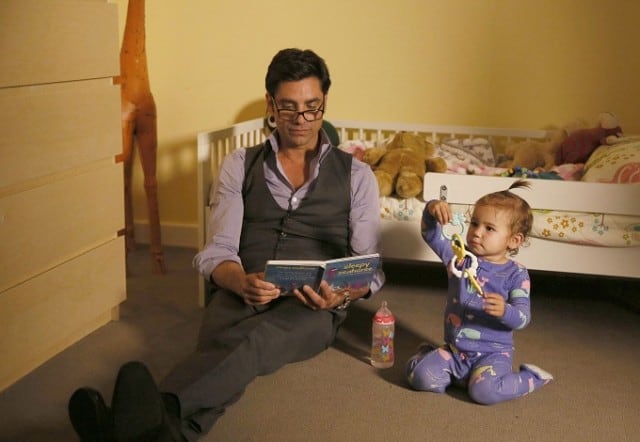 In what has been quite a dire fall for new network series, sometimes all a show needs to be is charming, and “charming” is exactly the word I would use to describeÂ Grandfathered. There’s nothing revolutionary or inventive about FOX’s new John Stamos-led comedy, but it works well thanks to some sharp, funny writing and an incredibly likable cast that features not just Stamos but also Josh Peck (The Mindy Project) and Paget Brewster (Community).

The events ofÂ Grandfathered‘s pilot go down pretty much as you’d expect: Gerald (Peck) arrives at Jimmy’s (Stamos) restaurant with his baby daughter, Edie, a child he had after a one-night-stand with his good friend, Vanessa (Christina Milian). In less than two minutes, Jimmy (and the audience) get all the details about how exactly Jimmy is Gerald’s father and thus how he is a grandfather to Edie, news that completely changes the 50-year-old bachelor andÂ restaurateur’s world in the matter of seconds.

As I mentioned above, this is a story we’ve seen many times before, and pretty much all ofÂ Grandfathered‘s big “surprises,” from Jimmy running through the street to take Edie to the hospital to the reveal that Sara is the “Sushi” to his “Ponyboy,” are clearly telegraphed. Still, though, it’s material that is fun and enjoyable, especially when played so wonderfully by the likes of Stamos and Brewster, who are easily responsible for the biggest laughs of the premiere.

GrandfatheredÂ should also be admired for how quickly it establishes its world and the many characters that populate it. Not only do Jimmy, Gerald, and Sara all feel like real, fleshed-out individuals by the end of the half hour, but Jimmy’s assistant, Annelise (Kelly Jenrette), and the chef in his restaurant, Ravi (Ravi Patel), also possess distinct and memorable personalities that can be mined for comedic material without ever derailing the main story of this lonely man discovering what family really means.

That last sentence might sound a little schmaltzy (and the showÂ kind of is), butÂ GrandfatheredÂ uses enough restraint to make sure it doesn’t feel like 2015’s version ofÂ Full HouseÂ (wait till 2016 on Netflix for that). It’s a solid combination of heart and humor that help elevate this series beyond its simple premise, making it my favorite comedy of this fall and one that I’m very eager to see grow and develop more in future episodes.

What did you think ofÂ Grandfathered? Did you enjoy it as much as I did, and will you be tuning in for next week’s episode? Comment below and let me know.Â