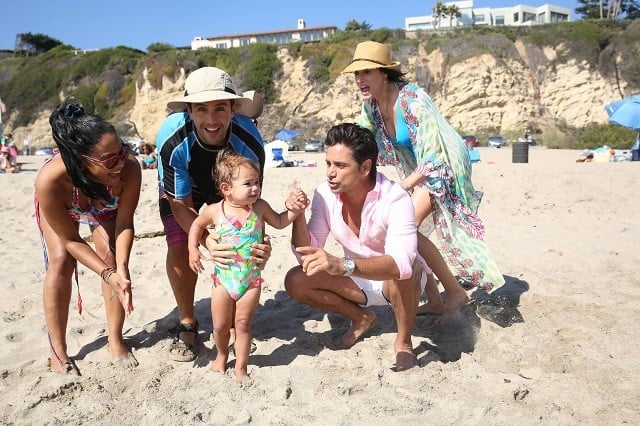 Second episodes for any series, especially comedies, are difficult, and Grandfathered wasn’t able to rise above those challenges this week. After a wonderfully charming series premiere, the FOX sitcom struggles to regain that magical chemistry in “Dad Face,” an episode that follows the same familiar patterns of the pilot but lacks much of the wit and one-liners that made that episode work.

The big conflict this week is whether or not Jimmy will skip out on Diddy’s White Party in order to join Gerald, Sara, Vanessa, and Edie for a family day at the beach. After immediately saying no at first, Jimmy reconsiders and decides to go with his newly formed family, even though it’s obvious, due to his fancy suit and the constant checking of his phone, that his mind is elsewhere.

As I said in my review last week, Grandfathered isn’t breaking any new ground with the story it’s telling. This is well-covered territory, but what made the show work so well was that its cast (and by extension, its characters) were likable enough that you wanted to spend a half hour each week with them. A lot of that easygoing allure is gone in “Dad Face,” replaced with Vanessa’s over-the-top use of her phone (I remember her using it a lot in the pilot, but not that much), Jimmy’s fully returned shallowness, and a bunch of jokes that miss more than hit.

Fortunately, though, what still work well are the emotional moments. Gerald’s speech to Jimmy at the White Party borders on saccharine, but Josh Peck sells it well enough. Plus, the line about how “uncool” family time is leads nicely into Jimmy calling the experience of bringing Edie into the water for the first time “cool” at the end of the episode; in just two short scenes, we see solid growth from Jimmy, the slow but steady realization that the glitz and glamour of his old life can’t make up for the love and connection that he was missing.

And while Jimmy’s ultimate transformation from womanizing bachelor into family man is pretty much the full scope of Grandfathered, the series has to be sure that it doesn’t give viewers the same exact story every week. Why not build off of Jimmy’s obvious feelings of love and affection for Edie, which were so evident in how he behaved with her in the premiere? Why not do more with the father-son dynamic between Jimmy and Gerald than simply play out a lot of the same beats of the pilot, with Gerald telling his dad off yet again?

Grandfathered has a strong cast and a lot of potential to be a warm, funny, and smart family comedy, but it needs to allow its characters to evolve naturally and not get stuck in the same old storytelling routine in each episode. Here’s hoping that this is just the typical issues that every new show faces in Episode 2 and that we’ll see a fresher, funnier, and better Grandfathered next week.

What did everybody else think of this week’s episode ofÂ Grandfathered? Comment below and let me know.