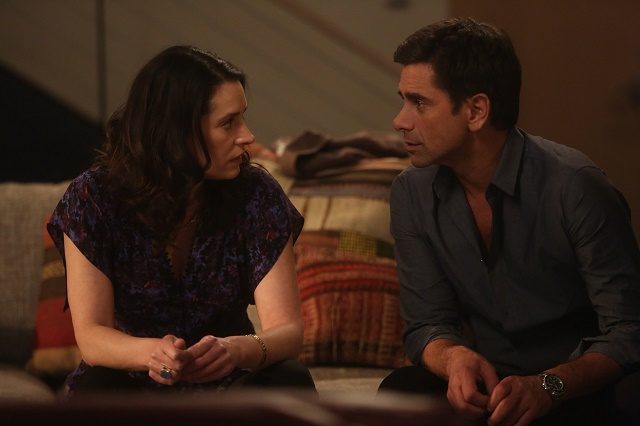 TV writers love to end season finales on cliffhangers; not only do these twists and surprises shock the audiences, but they supposedly leave fans wanting more, ensuring they have to tune back in during the fall to see what happens next. However, not all finales need to end on cliffhangers, andÂ Grandfathered‘s first season finale suffers from a forced one, a turn of events that doesn’t propel the story forward in any type of way but instead brings us right back to square one.

Anyone who has been watchingÂ GrandfatheredÂ since it premiere wouldn’t believe that Jimmy has totally changed; he can still be shallow and superficial from time to time, and he’s not the perfect father or grandfather or even boyfriend. But as the sitcom’s first season has moved along, there’s been a compelling amount of growth and maturity exhibited by John Stamos’s lead character, and it was arguably all leading up to the scene in last week’s episodeÂ in whichÂ he admitted that he didn’t deserve the wonderful family he now has. In that moment from “The Memorial,” Jimmy finally understands the importance of the people in his life, including Sara, and he realizes that the life that he wants is with them–it’s what he’s always wanted, even if he didn’t know it before.

That’s why it’s unbelievably frustrating to watch Jimmy backslide in “The Cure,” as he lies to Sara’s face about breaking up with Catherine and only realizes he’s made a mistake after watching Gerald’s proposal video for Vanessa. Are we to really believe that after everything we’ve seen from Jimmy this season that he would pause at the opportunity of getting back together to Sara, that he would really question who he wants to be with? Ultimately, his inability to break things off with Catherine immediately and Edie then spilling the beans on him going to the airport just feels like contrived drama to get us to the moment at the end of the episode, where this time it’s Jimmy left alone at The Cure concert instead of Sara.

Throughout my reviews this season, I’ve stated countless times how Jimmy and Sara have been the best part ofÂ Grandfathered, thanks in large part to the chemistry between John Stamos and Paget Brewster. If Danny Chun and the rest of the show’s writers had really wanted to set up a more exciting second season (whichÂ GrandfatheredÂ may not even get), then why not have Jimmy and Sara officially get back together? They’ve been teasing it all season long, and pairing the two of them up as an actual couple could lead to more dynamic storytelling in the future instead of a rehash of how Jimmy needs to change. Nobody would have believed that just because Jimmy and Sara had become a couple that it meant that he hadÂ fully evolved from his more childish ways; however, if you ground that conflict in his and Sara’s renewed romantic relationship in Season 2, instead of forcing it into the first season finale, it opens up many more interesting storytelling avenues.

Maybe theÂ GrandfatheredÂ creative team thought that giving both of their central couples happy endings would have been too much for one finale, as Gerald and Vanessa do get engaged, even though his romantic plans fall apart almost immediately. As many sitcoms have proven before, though, typically the most romantic TV moments come in the least romantic settings, and Vanessa surprisingly popping the question to Gerald, as the two of them sit on the curb, covered in their own vomit, is one of the best moments the two of them have enjoyed so far inÂ Grandfathered‘s short run. Here’s hoping we get more sweet scenes like that between the two of them if the show is renewed for Season 2.

And there’s still a lot of fun moments from Jimmy and Sara in “The Cure” as well, from theirÂ Austin Powers-inspired attempts at covering up their kiss to the flirtatious scenesÂ they share right before almost jumping into bed together. Even Jimmy’s break-up with Catherine at the airport, a nice inversion of the “Race For Your Love” TV trope, is really funny. It’s all wonderful, entertaining stuff, but it’s tainted by the stink of the contrived drama the leads to the episode’s closing scene.

In many ways, “The Cure” is representative ofÂ Grandfathered‘s entire first season: a mixed bag of hit-or-miss jokes, mishandledÂ storylines, and fabulous emotional moments. However, there’s no denying that this season finale frustrates more than it entertains, especially since it follows two of the best episodes that the show has ever produced in “Jimmy’s 50th, Again” and “The Memorial.” Here’s hoping that ifÂ GrandfatheredÂ is renewed for Season 2, it learns to trust in its characters’ authentic, emotional journeys and not compromise them with forced, unnecessary drama.

What did everyone else think aboutÂ Grandfathered‘s finale, and how did you feel about this season as a whole? Do you think the show will get a second season? Comment below and let me know.