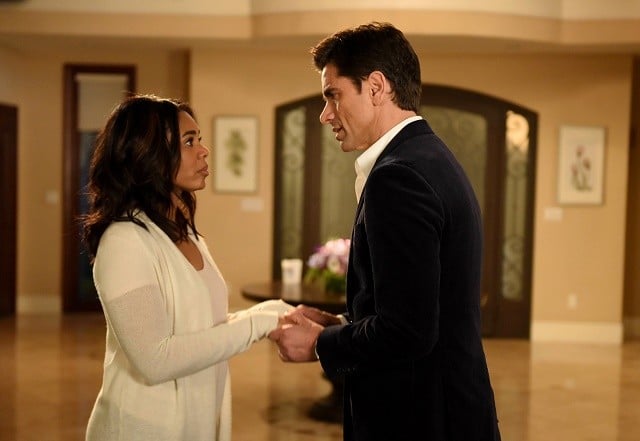 Even though he’s obsessed with being the perfect everything to everyone, Jimmy Martino is rarely ever the flawless father, grandfather, or, in this case, boyfriend, and he learns one of the main reasons why in tonight’s episode ofÂ Grandfathered. Of course, it’s Sara who causes Jimmy to have the realization that he’s always so focused on what he wants and what he thinks is best for other people that he hardly ever recognizes what the individuals in his life actually need.

In “Some Guy I’m Seeing,” it’s all about what Catherine needs, as her and Jimmy’s relationship continues on from last week’s episode. Although Jimmy thinks he’s doing all the right things by purchasing Catherine her ownÂ toiletries for his apartment and instructing his doorman to allow her to enter at anytime, it doesn’t seem like anything real or special when he fails to listen to Catherine talk about her problems with her sister.

This storyline fits incredibly wellÂ with Jimmy’s journey throughout Grandfathered‘s first season. He’s constantly been struggling to become a person of real substance, a family man who isn’t defined by his wealth or luxury or status. With Catherine, he initially backslides, sleeping with her nonstop and providing her with gifts instead of actually having real conversations with her. As I stated above, his realization about what’s wrong with their relationship only occurs after he speaks with the one woman that he actually listens to: Sarah.

Even though Jimmy takes a slight step back at first in the beginning of “Some Guy I’m Seeing,” it’s encouraging and ultimately satisfying to watch him try to become a better man for Catherine. These efforts aren’t brought on by any type of jealousy or competition, and it doesn’t happen after he tries to have a rebound fling with some other girl. Jimmy’s attempt to listen and to have a deeper connection with Catherine is pure and honest, a sign that he’s not only adjusting to his roles as father and grandfather but that he’s growing up when it comes to his romantic relationships as well.

And really, everything involving Jimmy is the best part of this week’s Grandfathered, as Gerald and Vanessa’s story about how different they are from each other is textbook sitcom stuff in all the wrong ways. It’s not surprising that Vanessa gets frustrated with Gerald and Sara’s intensely nerdy ways of picking movies for Movie Night, or that he gets a little too riled up while watching MMA with her and her cousins. That would be completely okay if it led to any type of interesting development between them; instead, it’s a standard, by-the-book obstacle they have to overcome, and it feels as if the writers just needed to keep Josh Peck and Christina Milian busy for the half hour but couldn’t find them anything fun to do.

However, despite my issues with Gerald and Vanessa’s storyline, “Some Guy I’m Seeing” is a mostly successful episode ofÂ Grandfathered. It’s a half hour that showcases Jimmy’s attempts to be a better, more mature person and how Sara and Gerald are instrumental in his continuing evolution.

What did you think of this week’s episode ofÂ Grandfathered? Comment below and let me know.

Jimmy tries to be the perfect boyfriend to Catherine in a solid episode of Grandfathered.