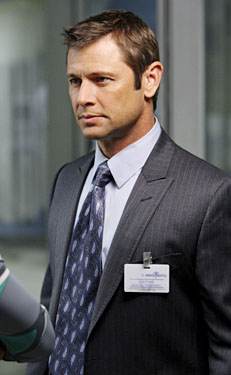 Former Melrose Place star Grant Show will make an appearance in the first three episodes of USA staple Burn Notice’s upcoming season, as reported by Entertainment Weekly. He’s said to be playing a CIA operative named Max, though no other details were released. Burn Notice premieres its fifth season sometime this summer, likely around the time that White Collar and Covert Affairs make their return (June 7th), and its prequel movie Burn Notice: The Fall of Sam Axe will premiere April 17th.

Since Show left Melrose in 1997, he’s made several television movies in addition to being a popular guest star on the likes of Big Love, Private Practice, and Six Feet Under. You may have also seen him in CBS’s short-lived Swingtown or in last year’s Accidentally on Purpose, also on CBS. He may not have had a lot of action-y roles in the past, but I think Grant will add a little extra spice to the beginning of what is sure to be a pretty explosive season.

Are you getting excited for the next season of Burn Notice? Did last season leave you wanting more? Do you think Grant will be a good addition to the cast?