It’s kind of funny to think that Leonardo DiCaprio doesn’t date women that are over 25, though you can imagine that some people might see it as a personal failing. But all in all it doesn’t seem that this is a newsworthy endeavor so let’s go on and take it as a spoof as it really seems to be. After all if you’re going to really elevate something like this as news then you might want to go ahead and turn around and see what’s going on behind you since there are literally hundreds of more interesting and engaging subjects to talk about than this. But since this is where we’re at let’s go ahead and ride these rails with a crazy train that’s befitting of the ride.

DiCaprio is the kind of actor that people either love or hate, it’s honest, it’s been seen to have real-world applications, and it’s something that has kind of helped to build his career. He’s been a polarizing figure without even trying since he’s taken on roles that some think are great but others might think are simply horrible and don’t paint him in a good light. His very existence has been this way since like so many stars he’s been scrutinized and analyzed and found to be this kind of person or that person by those that have an investment in this kind of gossip and rumor that might be deemed as important by those that actually subscribe to such social madness and enjoy spinning on that particular hamster wheel of opinion. 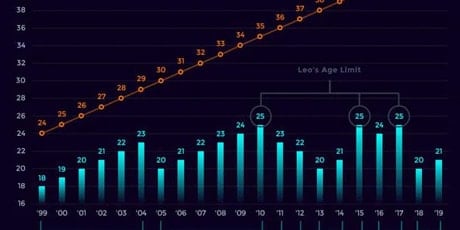 If you think that DiCaprio has a type then you might be onto something, so long as you mention that he likes women that are 25 or younger. While that might mean at this point that it’s getting a bit dodgy, considering that he’s now into his mid-40s, it’s till something he seems to enjoy since if you look at the chart above you can see that the age of the women he dates has remained pretty consistent, from 18 (thank goodness) to 25 max. That might seem like he’s kind of picky to a lot of people but at this point the youngest he’s gone in the last decade has been the age of 20, meaning that’s kept less than two decades between himself and his chosen girlfriend. What’s really kind of interesting at this point though is the fact that since 1999 he’s gone through over 20 women, a lot of whom have been quite popular in their own right and had still found some reason to part ways with him at some point for some reason. To be honest there’s a got to be something there that’s a little more interesting than just how old his girlfriends have been over the years, and why he doesn’t date anyone that’s no more than a quarter of a century old. That’s not the strangest preference out there to be honest since there are a lot of men that prefer younger woman for various reasons, not the least of which is that older women do tend to have more experience in relationships and don’t put up with the nonsense that can come on occasion.

It is interesting to see how this could be one of the reasons why he doesn’t go for women that are older than 25, though the idea that women below this age are more impressionable and not as capable of being as opinionated would certainly work against the reason mentioned above. In this era it would seem that young women are becoming more opinionated than ever, have gained the kind of life experience that keeps them from being so easily fooled or wowed by anyone, and aren’t bound to be the docile minds that an older man might be able to deal with in their own ways. But then again, it could be that Leo simply likes women that are young because they do have more energy and are able to fully enjoy themselves since their youth and vigor makes this possible. It’s definitely a possibility that there are many upon many reasons why a man would seek to date a woman within a certain age range, but trying to figure out why is kind of like trying to figure out why a person prefers one clothing brand to another. The answer there is that preference is all up to the individual, and if they want to inform others as to their reasoning that’s their prerogative.

One thing that’s sure to be noticed is that his minimum age has risen throughout the years since he’s no longer dating 18-year old women it would seem, as the minimum has bumped up to the age of 20. It might make him kind of a creepy old man in another decade or two if he’s still dating 20-year old women, but for now it would seem that he’s allowed to be a player.