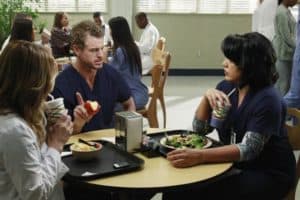 A new episode of Grey’s Anatomy will be airing this week on February 24. Debbie Allen will be directing the episode while Loretta Devine, Peter MacNicol and Nancy Travis will also be guest starring.

The baby drama featuring the trio of Mark, Callie and Arizona will continue to grow. Mark makes it very clear in the episode that he plans to be a father to Callie’s baby, and play a role in the baby’s life. This, of course, creates tension between the trio.

Meredith, meanwhile, discovers that her eyesight is failing as a result of her fertility treatments and is faced with a choice: continue the treatments or choose to save her eyesight.

April also becomes closer to Dr. Stark (played by Peter MacNicol) and realizes there’s more to him than meets the eye.

Below are three sneak peeks for the February 24 episode, as well as promo photos, from ABC.