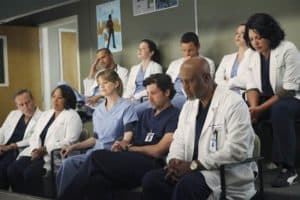 When events like school shootings happen, I can’t help but question the world and wonder how anyone could do something like this. It baffles my mind and I feel like I need to know how, why, what could be so bad in someone’s life that they feel they need to hurt others like this. It’s so undeniably devastating. It hurts my heart.

So when events like these are fictionalized for a television show, I watch with anxiety, cuddled up, with goosebumps on my skin for the majority of the hour. This week’s Grey’s Anatomy did just that… but it also did more.

This week we saw a somewhat silver lining that can come with these events. People coming together. We also got to see some healing for the staff of Seattle Grace, having experienced their own similar tragedy not too long ago.

Cristina, who has been dealing with Post Traumatic Stress from the last season finale’s events, made the biggest recovery. Planning to spend the day at the Space Needle, she instead followed an ambulance to the scene of this horrendous crime. She ended up spending the day in the OR successfully saving the shooter who caused this tragedy with Teddy.

Meanwhile, Meredith and Derek worked tirelessly to save a professor who saved many students. Whereas Derek worked on the patient in the OR removing his skull, Meredith couldn’t help but check on and update his wife. As she stated in the episode, she was once that wife and he has no idea how traumatic the events at Seattle Grace were for her or how traumatic they are for the professor’s wife.

Lexie, Mark, Hunt, Bailey, and April all battled through to save their patients. After refusing to work with Teddy to save the shooter and with a little wisdom from Karev, Avery was able to tell the shooter’s mother that he was still alive and realize that no matter what the patient did, he has a right to be saved. Karev meanwhile stood up to Stark (the new pediatrics surgeon) to do what he thought was right for his patient. Callie and Arizona worked together to save this patient’s leg.

Perhaps the most affecting scene in tonight’s episode was when Meredith brought the Professor’s wife and some of the Pacific College students onto the bridge. Initially I thought she was going to share her own experience and then they looked out the window to see hundreds or thousands of people holding a candlelight vigil outside the hospital. At this moment, I couldn’t help but shed some tears and also crack a little smile. What a great thing to see, people coming together to support others in their time of need. It’s the one sliver of goodness we get when tragedy comes along and the Greys writing team really showed this well.

The staff of Seattle Grace came together in the viewing room above the OR. Watching Cristina and Teddy saving the shooter, you could feel their emotions releasing. They hugged, they cried and then they all busted out laughing. They saved 26 out of 26 patients during this tragedy and that was just the catharsis they needed.

So what did you guys think? Did you have chills all throughout the episode as well? Do you think the events of this episode healed our favorite surgeons? Sound off in the comments below.

Next week, we’ll get back to the love as Arizona tries to win Callie back and Teddy has to make a big decision for her new husband, Henry, during his surgery. Check out our sneak peeks here. (Groundwork for both these storylines happened this week as Arizona attempted to talk to Callie during surgery and Teddy married Henry so he could have insurance.)