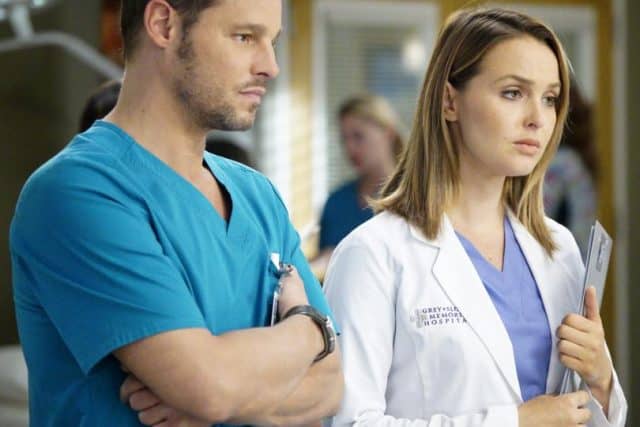 Since the season premiere Alex has had a long way to go to redeem his actions. What started out as a personal grievance snowballed into serious criminal and professional consequences. This week’s episode was all about Alex. He has alot of work to put in to redeem himself before his trial, but will it be enough? It also brings up a much larger problem for Grey’s Anatomy which will shake up everyone’s perception of past and future residency programs.

With his trial date coming up, Alex’s only job is to keep his nose down in the clinic. Don’t make waves, don’t over-engage, just do as he’s told and nothing more. Catherine is just itching to get rid of Karev, going so far as to scold Bailey for being too lenient with her staff. In a way she is right. Any other doctor would have fired Ben for what he did a few months ago, but because he was the favorite resident and married to the Chief, he got a slap on the wrist. Bailey can’t bring herself to fire Alex because he was one of her residents. She watched him grow from a smart-mouthed, egotistical intern to a compassionate pediatric surgeon. She can’t treat him like one of her children anymore though. This child’s all grown up and he made a big mistake. That’s not going to stop Alex from trying to redeem himself.

Alex meets a pregnant woman at the courthouse while awaiting his trial date, who he notices has a peculiar rash on her arm. She takes him up on his offer to come into the free clinic, but wishes she hadn’t by the end of the day. Alex’s patient has pancreatic cancer, so advanced that in order to treat it they would have to terminate the pregnancy. Alex makes a different suggestion which would buy time for the baby, which infuriates Bailey. Ultimately Bailey decides to do the surgery because it’s what’s best for the patient. The whole ordeal brings up a much larger, scarier issue. Why did the residents need second chances in the first place? Catherine’s looking at her husband’s training skills. This cannot end well.

It’s been awhile since Grey’s Anatomy genuinely surprised me, but mission accomplished this week. I really didn’t think that Leah Murphy would ever come back to Grey Sloan; they rarely do when they’re fired. The only person who’s left Grey Sloan in a more horrible fashion was Izzie, and we know she’ll never come back. Leah didn’t just do poorly as a doctor, she was a horrible problem for human resources. She let her relationships with other surgeons interfere with work, which nearly brought down the hospital in sexual harassment lawsuits. Which is why Leah doesn’t get a warm welcome upon her return, except from the new attendings who don’t know her. Maggie and Riggs know a little something about rough times at Grey Sloan, so there’s some kindred spirits there. Time will tell if Leah has really learned from her past.

We all know the hell that Amelia went through when she lost her son in Los Angeles. The grief and the guilt nearly killed her. It was so heavy that she couldn’t stay in LA, which prompted her move to Seattle. Once there she reinvented herself, became strong and confident in her career and her relationship. The thought of having a child again terrifies her. The responsibility of taking creating a human life and taking care of it for the rest of her life is something she can’t handle right now. It’s exacerbated when she loses a young boy whose father crashed their car in a fit of road rage. The person Amelia ends up confiding in is Alex. Up until this point we assume that Amelia’s family knew about her last pregnancy, but apparently not. Evidently no one in her family knows she was ever pregnant, not even Derek before he died. Owen only knows bits and pieces of the story. Alex can’t tell Amelia she’s not wrong to be afraid, to not get pregnant when she doesn’t feel ready. The only thing Alex can do is quietly tell Meredith to include Amelia more.

Alex has fallen, but he can still rise. Will he get the chance?

Alex proves his worth as a doctor and a friend in this week’s Grey’s Anatomy.