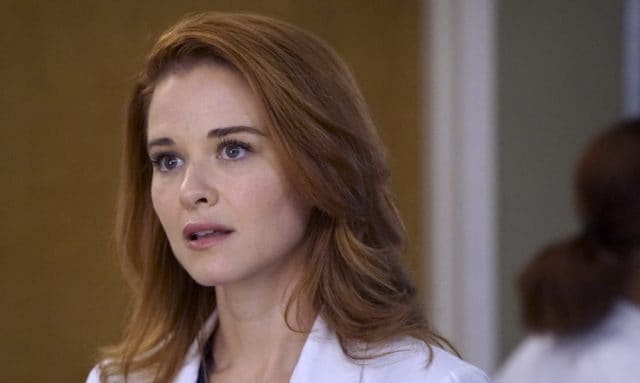 April Kepner’s time on Grey’s Anatomy is coming to a close, but this episode created an extraordinary amount of stress over how April will depart. When ABC first released the promo showing that April’s life was in very real danger, the fandom had every right to freak out. April’s condition was pretty tenuous in this hour. There was also some deja vu, since April came into the hospital with the same injuries that Meredith had all the way back in Season 3. But did April get as lucky as Meredith did?

Long story, short, it was close. Too close. Jackson actually prayed to God, close. The day started out pretty upbeat, save for Arizona’s bomb to her friends that she was quitting to move to New York for Sofia. That was a bummer, but everyone was happy to receive April’s invitation to Jo and Alex’s wedding. Jo and Alex were especially happy not to have to do anything but pick out a cake. April’s organizational skills have been mocked over the years, but if you want something planned quickly, you go to her. This is just one of her many attributes that people take for granted, a fact Alex points out when April is brought in.

This April-centric episode was very similar to Meredith’s near drowning back in Season 3. They were both brought in with hypothermia, they were both found much later than they should have been, and they were both worked on for hours after their initial injuries. Just as when Meredith was brought in, everyone rallied around April, while trying to keep it together. I’ve got to give it to Maggie. As a cardio surgeon and as Jackson’s girlfriend, she was under enormous pressure to keep April alive. She wouldn’t give up, even when Jackson was starting to. Because of her determination, April not only survived, but woke up intact. She woke up to Jackson praying for her, a miracle in itself! She woke up to her best friend in a puddle of tears. And she woke up to get back to Matthew. Because he was in the car with her when it overturned, because they are officially back together. It wasn’t right for April and Matthew to be together years ago when April had unresolved feelings for Jackson. Those feelings have since been resolved, and April is a different person now. For that matter, so is Matthew. She lost a son and he lost a wife, and out of that pain came understanding and renewed love.

So April will live, and it looks like she’ll be living the foreseeable future with Matthew. This answers half the question as to how April will depart Grey Sloan Memorial. As we learned last week, Arizona will leave to go to New York. One problem she was stuck on was switching back to pediatric surgery because the hospital she is transferring to already has a maternal-fetal specialist. A visit from Dr. Herman (guest star Geena Davis) changes all that. Recall that Dr. Herman was Arizona’s mentor in fetal medicine, before her brain tumor left her blind. Since then, Herman has been traveling and teaching. She comes back to Grey Sloan not only to make sure her tumor hasn’t returned, but to recruit Arizona to her new project. Inspired by her protegee’s success in the field, Herman wants to launch a new Maternal-Fetal surgery center where Herman teaches, and Robbins performs surgery. As long as she can do it in New York, Arizona is in.

This episode was all about renewed faith and renewed love. Both Arizona and April found that, even with all the changes in their lives. Jackson found a faith he probably had all along, Amelia is stronger for helping a young addict very much like herself, and Meredith (with the help of Derek’s ferry boat scrub cap) was reminded about the circle of life. Cliche as it may sound, that’s how it goes.

Were you pleased Grey’s Anatomy chose not to kill off April? And now that we know she survives, exactly how will she leave the show?

Did April Kepner survive her time on Grey’s Anatomy?