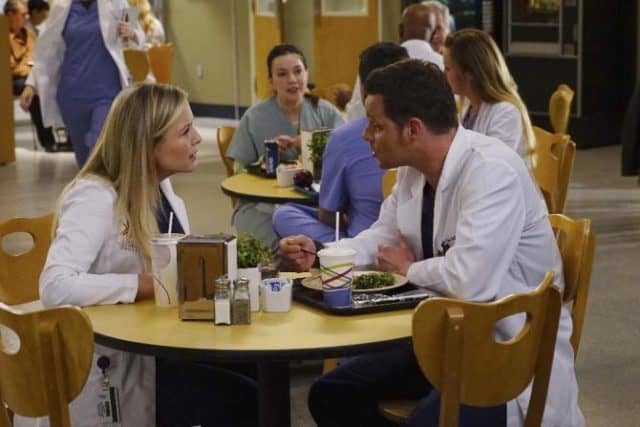 Grey’s AnatomyÂ laid the groundwork for next week’s episode while showing that it still knows how to spell out when someone is just being too silly to tolerate.Â While Callie and Arizona prepared for their upcoming custody suit, three couples faced their challenges head on. Who came together, who fell apart, and who agree to an impasse?

Arizona and Callie ask their friends to step up for them/take sides in their upcoming custody battle for Sofia. Alex says no to both Callie and Arizona. Both Owen and Meredith agree to speak for Callie. Arizona feels that she will loser her daughter forever, that she may be fighting a losing battle. Webber tells Arizona that she doesn’t get to stop fighting for her kid. This is shaping up to be a very painful road going forward, but it’s too late to turn back now.

Stephanie finally let her guard down with a nice guy. Kyle is good for her in so many ways. We can’t forget though that they met because Kyle was a very sick patient. Having Stephanie in his corner may seem like a good thing since she can tell when he needs to come into the hospital, but it’s so much more complicated than that. Once Amelia finds out that Stephanie and Kyle are seeing each other, she forbids Stephanie from being a doctor on his case. Even Stephanie being in the room is a bad thing since she questions Amelia’s every move. So Amelia has no choice but to ban Stephanie from the OR altogether. Being forced to sit in the waiting room like any other loved one is extremely painful for Stephanie. She spent her childhood completely helpless as a patient, so she can’t be the sit and wait person now. As much as she likes Kyle, she can’t compromise who she needs to be for him. Of course Stephanie being Stephanie, she only has enough strength to break up with Kyle in a letter.

Bailey spends the day extremely frustrated with Ben for getting his job back at the hospital. Granted, it’s only his old job as an anesthesiologist, but she’s still upset he’s back in the OR. The couple spends a whole surgery going back and forth arguing, which Riggs and Maggie have to suffer through. When the surgery Â is over, Riggs and Maggie get to say their piece. Maggie tells Ben that if Bailey really didn’t want him in the hospital, he wouldn’t be, so he needs to get that arrogance in check. Riggs reminds Bailey that they were also eager residents once, who felt as if their world would fall apart if they couldn’t practice medicine. It’s not just Ben’s arrogance which keeps him attached to surgery, it’s his physical need to learn. Bailey can’t change that, nor should she. So Bailey puts Ben back on the surgical rotation, but he’s still sleeping on the couch. Baby steps.

Jackson and April finally believe that they’ve been given a second chance at parenthood. They’ve let themselves relax and start to enjoy the pregnancy rather than walk around waiting for the other shoe to drop. When Arizona sees something potentially worrisome on April’s latest ultrasound, they feel like the universe has betrayed them. April takes out her frustrations on Arizona, claiming her friend must have missed something important. With the custody case coming up, Arizona feels that on top of everything else, she’s failed her friend too. They both stop wallowing long enough to run the right tests to get a clear picture of the baby. The baby is fine, but Arizona decides she can’t be April’s OB and her doctor, so she fires herself.

Meredith really has no drama to speak of for once. It’s really a nice change of pace that she can just sit back and watch the drama happen with others. But even she has her limits. She spends the whole day with a patient who is secretly in love with a man, but is married to a woman. Her patient ends up having inoperable cancer. He could choose to spend his last remaining year with the man he loves, but he pushes him away instead. After witnessing the depth of this heartache, Meredith tells her sisters to stop making excuses and just live their lives. Maggie took a chance on a relationship and it ended. So what? You learn something from it and move on. Amelia takes Meredith’s words to heart. She tracks down Owen to ask if they can really give a try at having a real relationship. Fingers crossed these two can finally make it work.

Was Stephanie right to break up with Kyle? With the Calzona custody battle set for next week, whose side are you on?

Grey's Anatomy Season 12 Episode 21 Review: "You're Gonna Need Someone On Your Side"

Three couples faced make it or break it situations on Grey’s Anatomy.