Home
Grey's Anatomy
Grey’s Anatomy Review: Get Over It 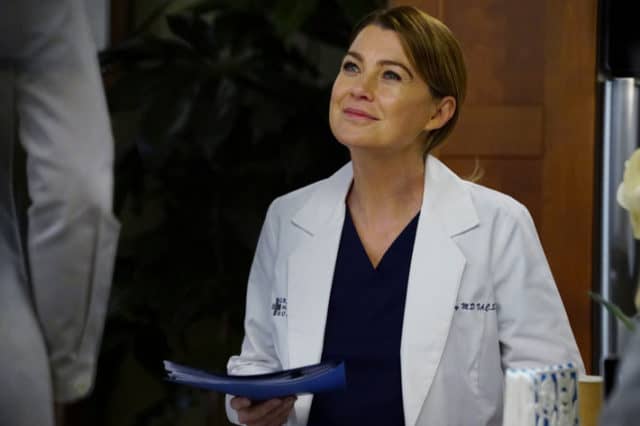 Just because Meredith Grey has returned to work, doesn’t mean the tensions on Grey’s Anatomy are eased. It’s the end of a lost battle, when you know that not only are you not going to win, but the purpose of your fight has been lost. All that’s left is broken pieces of what used to be trusted relationships. The things you used to be able to count on are burned, and opening yourself up to new avenues seems like a betrayal to the past. These are deep-rooted problems which aren’t going to be resolved easily, and may very well change the dynamics of everyone at Grey Sloan Memorial Hospital.

The fact that everyone wakes up alone at the top of the hour should be the first clue that almost nothing really changes. Webber avoids Catherine, Amelia hasn’t spoken to Owen in over a month, and Jackson’s icy attitude towards April is only getting worse. Meredith coming back changes none of this. April may be demoted in her own opinion, but Catherine sees great potential since she loves the paperwork side of things as much as the medicine. Jackson and Webber are in clear opposition against them, even in the OR. Both sides make points, and there’s an argument to be made that both sides are taking things a little too far. Jackson going over Catherine’s head is a bit much in a losing battle, and Catherine makes a comment which sends Jackson on an emotional ledge we’ve not seen him on before.

Being in exile for most of this drama means Alex can focus solely on the medicine. Unfortunately he can’t avoid politics anymore than Warren can. He and Riggs disagree on how to treat an infant with a heart condition, and worse yet, do so in front of the patient’s parents. Discussing the pros and cons of each decision is apart of the work, but it is not okay to put DeLuca in the middle, and it is certainly not okay to fight in front of panicked parents. Riggs won’t apologize for going around Alex to get the surgery done, not even when it puts Meredith off. Here’s another relationship which could be put in jeopardy. Meredith probably should give Riggs a chance, but would she do so if it meant hurting Alex?

Amelia is lucky she has so many friends who aren’t asking too many questions while helping her do surgery behind Owen’s back. The lure of the work is worth the risk of running into her husband. Once Amelia and Owen come face to face, they decide not to talk because unlike everyone else, they don’t want to fight. Nothing is settled, but nothing is lost yet. I’m not sure the same can be said for Catherine and the men in her life. What’s done is done, and given the success of Minnick’s program, fighting is futile at this point. So much inherent trust and faith has been broke though. Webber feels like he doesn’t have a friend in the world because both Catherine and Arizona are so chummy with Minnick, but there is something deeper with Jackson. There’s always been a piece of the puzzle missing with him. The whole hospital upheaval just unearthed it. There’s a reason he can’t look at his mother right now without feeling sad, and why he can’t stay in a room longer than a few minutes with April. The clue is his last name. Remember Catherine married into the family, and no one really mentions Jackson’s father. There’s a story yet to be told there, which we’ll see next week.

Tune in next week to see the missing piece of Jackson Avery’s history.

Truce is hard to come by with so many open wounds on Grey’s Anatomy, but some are more personal than others.