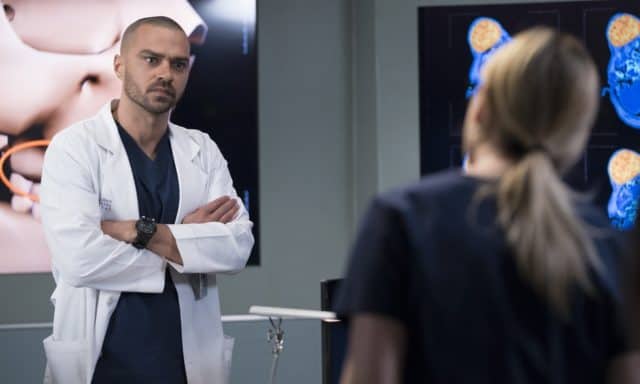 Grey’s Anatomy has taken on the Time’s Up movement in a brave way. In a hospital staffed with such powerhouse women and evolved men, it would be easy to sweep the ugly past under the rug. But Grey Sloan Memorial cannot escape the fact that it was funded by a man who sexually harassed over a dozen women. The show is taking on sexual harassment in the medical community, which important since hospitals by definition are very invasive places. The staff receives extensive training on privacy and harassment when it comes to patients, but among each other is a different story. There is no question that there need to be consequences for the decades of cover-ups, but does it have to come at the expense of patients?

Meredith started the ball rolling. As the latest winner of a Harper Avery Award, she volunteers to give it back, as well as the awards Ellis received. I like the way Meredith explained giving back her awards to her daughter with a comparison to spoiled milk. How else could you possibly explain sexual harassment to a 10-year old? That, coupled with Andrew’s continued smelly presence on her couch, doesn’t put Meredith in the best mood, but tested she is.Â As if Jackson wasn’t in enough trouble this week. As the head of the hospital board, everything is coming down on his head. He really, really didn’t need it to get out that he entered a million dollar medical contest that he secretly funded, and that his ex-wife is judging. It’s a legal, PR, and personal mess. This news infuriates Meredith, but she has to reign it in so that the two of them can perform a high risk surgery. A surgery that Jackson is timid about because it’s a pro bono surgery that could be either good or bad PR depending on how it goes.

Once again, Jackson’s focus infuriates Meredith. He’s in a difficult position because he bears the Avery name, as does his mother and his daughter. He didn’t even care that much about his grandfather when he was alive, but he loves what Catherine built for herself. Jackson is fighting for the living legacy, while Meredith fights for the past. As a woman, as a mother, as a surgeon who worked her butt off to become the head of her own department, Meredith is mad as hell. She has to take a stand on something she never expected, and she has to do it for people who aren’t around anymore. She has to speak for her mother by giving back Ellis’s awards, not to mention her sister Lexie, whose name is on a Harper Avery funded hospital. This fight is very, very personal to her, too. Jackson and Meredith choose to fix the problem through systemic change, starting with stripping the Avery name off of everything, replacing it with Catherine’s maiden name.

It’s just Alex’s luck that just as the hospital is the center of a sexual harassment scandal, his own unsavory history walks into the ER. Remember Nurse Olivia, aka the girl he gave syphillis, who then gave it to George? (This all makes season 1 sound much worse than I remember.) To be fair to Nurse Olivia, she was really humiliated back in the day. Plus, she has a point that Alex was never punished or belittled for his behavior. Not that he hasn’t had his share of bad things happen to him over the years, they just weren’t directly related to this. Olivia could say anything she want about Alex’s behavior then, but for her to make all kinds of allegations about Alex’s behavior now is a little over the top. Her comments about Alex and Izzie were definitely out of line, but at least she got the chance to see that Alex has changed. His past hasn’t, which is what will take him on a road trip home next week to check on his mother.

The episode wasn’t totally bad. Owen and Amelia teamed up to do something pretty spectacular, by taking in Owen’s foster son’s mom, together. It may be unconventional, but if social services approves it, the outcome could be pretty incredible.

Systemic change is a nice idea, but will Grey’s Anatomy really be able to pull it off in the face of multiple lawsuits?

Grey’s Anatomy takes on the Time’s Up movement, but who will pay for Harper Avery’s behavior?