Home
Grey's Anatomy
Grey’s Anatomy Review: Why Do You Need This? 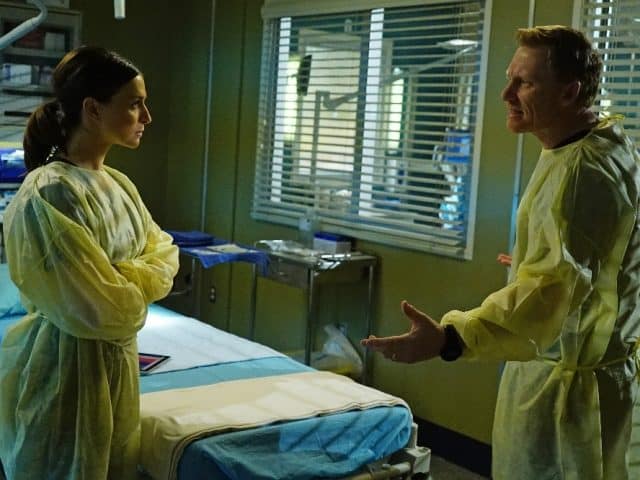 Having attended the Grey’s Anatomy panel at this past weekend’s Paleyfest, we have a pretty good idea what the next few episodes of the hit ABC drama will look like (check back in next week for all the details). Series star Ellen Pompeo’s upcoming directorial debut in particular is not to be missed. To give you a hint, I’ll use this anatomical analogy. Season 13 has been an open wound of sorts for everyone. This week is the salt on said wounds, while next week is about mending, but not necessarily healing, the trauma. Heavy material is coming, so get your tissues ready.

When we say salt on the wounds, we mean some very difficult and painful salt. All of the doctors have pretty much let go of their initial anger, but the resentment and hurt is festering like an open sore. A lovely couple (played by brilliant Hollywood veterans Hal Holbrook and June Squib) have an impact on a couple of the doctors. It’s easy for them to do since Elsie and Louis Clatch are retired surgeons. Surgeons who fell and stayed in love for 60 years. These days that is a miracle, and definitely not something we can foresee for Amelia and Owen right now. Maybe Bailey and Ben though. Amelia and Owen’s honeymoon phase is nonexistent. Amelia can’t talk to her husband, but you come to realize he is not really listening. Part of this is that he’s asking the wrong questions. Instead of demanding that Amelia come home, he should be asking why Amelia doesn’t feel comfortable coming home. It’s not just that Amelia doesn’t have the strength to be a baby, it’s that Owen wants one so badly he is pushing his wife away. In his mind a baby is the next natural step in the relationship, but he thinks it will be perfect and everything will be fine. Amelia is so fed up with Owen’s idea of a normal life she name drops Cristina to make her point. Do we really need to dredge up how Owen reacted when Cristina had her abortion?

All Owen needs to do is stay put, even during the ‘for worse’ part of the marriage. That’s precisely what the Clatchs did in their marriage. They stayed, they listened, and they argued, every day for 60 years. Even in the hospital they did this. Elsie made the decision to have Amelia perform a risky surgery on her since it promised the possibility of more time with her husband. She only gets a day, and it’s not enough. I have to say, Hal Holbrook is underutilized. Watching him walk out of the hospital as a man lost without his wife by his side has to be one of the most heartbreaking sights in Grey’s Anatomy‘s history.

The Clatchs affected everyone, particularly with the desire for more. Edwards wants more, DeLuca wants more. These two are going to have some tough decisions to make from this point forward. Edwards is fulfilled professionally, but hasn’t been in her personal life for some time. As for DeLuca, he’s going to end up in a sticky situation now that he’s admitted he’s in love with Jo.

Riggs and Meredith have been doing this dance around whether or not they should date that, I’m sorry to say, has lost a lot of its appeal. Meredith seems to be making more of a show of questioning their non-relationship than having to bypass active obstacles in her path. She really doesn’t have any real reason to be with Riggs. Save for Owen, no one really knows him. Once Riggs gets out of his own way and tells Meredith all the reasons he likes her, she does agree to a date. Whether or not they’ll ever get there, time will tell.

Webber is wallowing in his resentment, not that we blame him. He feels betrayed professionally and personally by Bailey and now Arizona. He doesn’t want to feel this way, but it’s hard to get over. Time is a precious commodity, but that is what Webber needs most if he’s going to simmer down.

Teeing up a dramatic Maggie-centric story for next week, Diane Pierce returns to Seattle for a mastectomy to treat her breast cancer. The problem is that she still hasn’t told Maggie the truth, which puts Jackson in a very difficult position as Diane’s surgeon. Maggie says ‘boob job’ more times than I thought was possible in a day before Diane finally works up the courage to tell Maggie she has breast cancer. Unfortunately, Jackson’s surgery doesn’t go as planned. Diane’s health is more precarious than first realized, which is why Meredith is called in to consult and support her sister.

What did you think about the guest turn by Holbrook and Squib? Would you like to see Holbrook back again?

Grey's Anatomy Season 13 Episode 17 Review: "Till I Hear It From You"

Grey’s Anatomy gets a valuable lesson on time from veteran actors Hal Holbrook and June Squib in a beautiful guest performance.