Expect a Grey’s Anatomy/Private Practice reunion when Grey’s returns with new episodes on January 14th. Addison will be returning to Seattle Grace to perform a special operation. ABC has released promo photos for the episode. Check them out below. 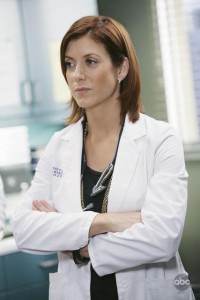 “Blink”- Mark flies Addison to Seattle to help with a difficult procedure on his pregnant daughter, Sloan, Owen questions Teddy’s motives when she assigns Cristina the lead on a complicated surgery, and Derek’s suspicions are raised when the Chief recruits Meredith to assist with a high profile operation on, “Grey’s Anatomy,” THURSDAY, JANUARY 14 (9:00-10:01 p.m., ET) on the ABC Television Network