There won’t be a new Grey’s Anatomy episode on January 28, but it will return on February 4 and we have promo photos from ABC to share with you below.

You can also view photos and sneak peeks for the January 21 episode. 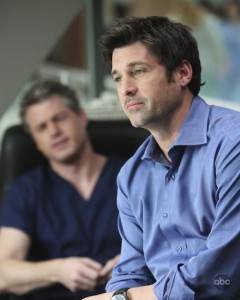 DEREK TRIES TO CONVINCE RICHARD TO SEEK TREATMENT FOR HIS DRINKING, EARN THE RESPECT OF THE HOSPITAL STAFF AND AVOID A POTENTIAL LAWSUIT, ALL ON HIS FIRST DAY AS INTERIM CHIEF, ON ABC’S “GREY’S ANATOMY”

As Derek begins his role as interim chief, he faces a potential lawsuit when Bailey and Meredith’s patient awakens from anesthesia mid-surgery. Meanwhile, Teddy refuses to place Cristina on her service, as Arizona tests Alex out in Pediatrics, and Mark refuses to speak to a heartbroken Lexie, on “Grey’s Anatomy,” THURSDAY, FEBRUARY 4 (9:00-10:01 p.m., ET) on the ABC Television Network