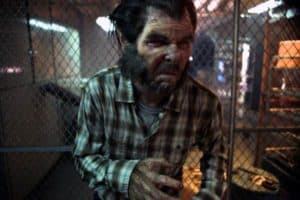 After having watched the pilot for NBC’s Grimm three times (once for pleasure, once to take notes from, and once on premiere night), I was curious how the show would go forward. It seemed to have a fairly good idea of the type of show that it wanted to be, but there were two very distinctive parts and tones that the show hadn’t yet resolved with itself and I thought that it would take a while for it to sort everything out.

Now that we’re two episodes in, I think the show is well on its way to defining itself at a pace quicker than I imagined it to be. “Bears Will Be Bears” wasn’t a perfect episode of television and there are areas where the show could improve/expand upon, but from where I sit, they’re relatively minor tweaks that could be applied fairly soon.

But let’s start with the positives, as “Bears” provided us with a lot of information on a new brand of creature for the Grimms to fight. Using a home invasion case as a template, Grimm introduced us to the jagerbars, a species that, upon turning 18-years-old, has a right-of-passage ceremony (a roh-hatz) that involves a hunt and two very scared individuals. I do hope that eventually we’ll see some of the different classes of creatures that the show is bringing up interacting with one another or maybe making a return appearance, just because it’d make all the talk of rituals, customs, and physicality that much more important, but for now, I thought the jagerbar case was an interesting twist on Goldilocks and the Three Bears. The show did a better job at taking the case-of-the-week a little more seriously, which was one of the criticisms I had about the pilot; there wasn’t any cheeky, wink-wink-nudge-nudge dialogue and the show was stronger for it, as it made Monroe’s quirkiness stand out that much more and allowed the stakes of the case to feel that much higher. Grimm is, by nature, a very out-there show and it doesn’t need dialogue that points out how out-there it is. 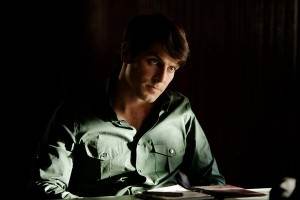 The final twist of the episode, which saw the demise of Aunt Marie, was a noticeably brave move for the show to make so early. It was obvious that she wasn’t too long for this world, but I assumed she would make it at least through the beginning stages of the show, imparting a ton of knowledge to Nick, before heading off to TV Heaven. Even though I thought that she was used purely as an exposition dump for the writers, I was kind of sad to see the character go, but again, the show will be better for it. Marie could have easily went from a mentor/bad ass in waiting to a crutch that Nick leaned on instead of growing, so I think getting rid of her could help speed Nick’s self-acceptance along. He won’t be fully understanding of his status as a hunter for a while, but it’ll be better for the show to show him learning stuff on his own than depending on Marie to provide him with answers/guidance.

However, while the case was handled pretty well and the death of Aunt Marie was a surprise (going into the episode, that is), the show didn’t quite get rid of other flaws it had in the pilot. I know this is only episode two and that the show is basically Nick’s Journey to Becoming a Grimm, but I hope the show starts fleshing out its supporting characters a little more; they made minor strides in “Bears”, as Hank revealed that his second wife was an anthropologist and Juliette is a veterinarian with a sarcastic side, but at the moment, everyone seems to be pretty one-dimensional. Grimm may be a procedural, thus decreasing the amount of time they can spend on character beats, but I don’t feel like we know who any of these people are, minus Nick and Monroe. Not surprisingly, the moments when both are on screen are when the show really pops, but the show can’t depend on the two to carry things from here on out. I don’t need endless backstory on minor characters or anything; I just need to feel like these people are three-dimensional beings and that I have a reason to care about them, because right now, there’s not a lot here.

It may seem like a minor nit to pick, but the police work seemed a little off to me in “Bears”. I was a little confused as to why, with a missing person, the force didn’t send out anybody to check out the area behind the (gorgeous) house of the Rabe family, especially when there were no other suspects to be named. I know that nobody was leaping to name them officially as suspects, as Hank even suggested that Gilda killed Rocky and was trying to throw them off by pointing at the Rabes, and that there were 500 miles of trees around the compound, but even a throwaway line about lack of resources/nobody thinking it was worth a shot would have sufficed, at least to me. Ultimately, of course, it didn’t matter, as Nick connected the artifact in the jagerbar house to something in Marie’s possession before questioning Monroe as to its origins, but it would have made more sense to have a bigger deal made about a missing person.

“Bears Will Be Bears” was an improvement over Grimm‘s pilot in that the exposition was cut down (and will be even moreso going forward), the more “playful” dialogue was done away with, and the central story of Nick’s heritage moved along nicely. The show still hasn’t been fleshed out to my liking, but I think that with time and a little fairy tale magic, it can create characters as vivid as the world they live in.