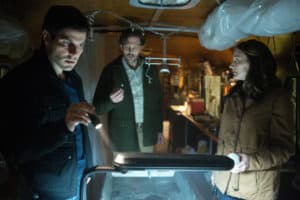 A ranch hand rides on to the field he works at and sees the corpse of a cow. The animal hasn’t been mutilated, but its stomach was cut open and vital organs looked to be missing. As he tries to get his gun, a glowing blue alien form breaks the weapon, impales the worker on a fence post, and hops a fence, (literally) leaving a piece of himself behind in the barbed wire. He goes to an abandoned barn where his very pregnant mate is staying and gives her the bag of meat he got from the cows, which she gorges on promptly. Despite her condition, they have to move in the morning to avoid detection, not only from the police but an alien hunter who treks the 136 miles to Portland in a bid to find them.

Unfortunately, the station wagon the aliens (named Vincent and Jocelyn) were using can’t go much further, leaving him to find another way for them to stay on the road. While the police have caught up to the scene on Hadley Ranch, including the broken fence from the stumble Vincent took, the alien causes a middle-aged woman in a 1978 red Bronco to crash, taking her car and dropping her in the barn that he and Jocelyn were staying in. He doesn’t kill, though – only stuns her long enough for them to make an escape. Nick and Wu, meanwhile, recovered a bit of skin from the scene that turns out to be neither animal nor human. It seems to be human skin with an animal-like response, particularly its luciferase qualities, but not much else can be figured out through testing.

Vincent thought that he and Jocelyn would be good to go now that they had a new vehicle, that he could get them to a safe place so she could have her baby and they could find other members of their species to live among. However, the ride in the Bronco is very uncomfortable for her, forcing him to take refuge at a nearby abandoned cabin. Once there, she’s hungry again and he has to find a field of cattle in which to poach later that night, which he’s had to do ever since they left Nebraska two weeks ago. They’ve been heading in a straight line northwest since then and the cattle killings have increased the closer they’ve gotten to the west coast; Wu discovers that the one thread linking all 27 cow deaths is the lack of ovaries in the victims.

Nick then takes this information to Rosalee and finds out that Vincent and Jocelyn are Gluhenvolk, a type of Wesen that originated in Africa once thought extinct. They tend to be hunted due to how valuable their skin can be on the open market and it’s considered good luck to see one, meaning that the alien hunter (who purported himself to be a UFO-ologist around Nick and Wu, though he snooped around the crime scene enough for his interest in the case to be monetary) has a pretty hefty head start in the race to find Vincent and Jocelyn. Nick, Monroe, and Rosalee find the hunter’s truck and trailer, the latter of which being full of fleshing knives, skin solution, and hooks. He kills the Gluhenvolk while they’re in full woge and tans their hides almost immediately, since he only has six to eight hours to do so before they change back to their human form. He then sells their skins and, considering their scarcity, makes a pretty penny doing so.

Not long after, the trio finds the cabin that Jocelyn was staying in. Upon seeing the Grimm, she goes into labor and delivers a baby girl, which Vincent is there to see after a close call hunting for food. The alien hunter had shot the bag of meat he was going to take Jocelyn, but he escaped with his life, only for the hunter to burst into the cabin with the gun full of skin preserving solution. Every Wesen woges in preparation and while Monroe tackles the hunter, he gets knocked out quickly. Fortunately, the gun had come loose and found its way into Nick’s possession, the Grimm shooting the hunter in the middle of the stomach. While Jocelyn and Vincent took the hunter’s truck and escaped to an Alaskan community of Gluhenvolk, Nick and company put the hunter in the front of the Bronco and left his dead body for the FBI to find. They get to see him turning from the Wesen that he was (species not identified) into his human form, right as the solution Nick shot into him wears off.

The Key
Nick accidentally interrupts Monroe’s date with Rosalee, where the two were talking about his parents’ desire to visit from New Hampshire, and shows the Blutbad the key that Aunt Marie gave him. While Monroe doesn’t recognize it right off, he gets an idea when Nick mentions how it can be used to form a map and runs down to his study to retrieve a book of maps that he inherited from his great-great-great-grandfather, a cartographer who worked near the Black Forest. The inked map that Nick shows him is a place in the Bavaria region of Germany, though that’s the extent of Monroe’s information on the key, which Nick explains came from Constantinople in the 13th century and was deemed too powerful to the royal families after the Crusades were completed.

The following day, he talks to Renard about the keys to get more information on what exactly he’s protecting. There are two keys that are currently unaccounted for, with Nick holding one and the royals possessing four following 600 years of intense bloodshed. They managed to tortureÂ one of the original seven Grimms who took the keys into turning on the other six and giving up his key, the other three being earned in battle. But what would the holder of all seven come to possess? Renard has heard several different theories, ranging from the secrets of alchemy to nails that were used to hold Christ to the cross to the Prophet Mohammad’s sword and the formula for everlasting life.Â

The Holiday
Encouraged by her recent successes, Juliette has been trying her best to continue rebuilding her memory of Nick, focusing in on a picture from a holiday party four years ago thrown by her friend Roni. After struggling to piece together the events that came before the picture, which shows them kissing under the mistletoe, she figures out that it was the first time that they said “I love you”; seeing as how she went from not being able to recognize her own boyfriend to recalling events that occurred nearly half a decade prior, she goes to see Monroe and tell him of the guilt she feels for treating Nick poorly through her ordeal. She doesn’t know if he’ll be able to love her again, to which Monroe refutes with the knowledge of Nick’s non-fading affections, and asks the Blutbad about what a Grimm is. Monroe informs her that a Grimm is someone who can see into the heart of darkness, someone who understands what other people cannot.

This phrasing triggers something in Juliette and the night in the trailer is becoming much clearer than it has been this season.

Additional thoughts and observations:
-I like how the first episode in Grimm‘s Tuesday tryout features a close-up of cow intestines within the first couple of minutes. Welcome to the party, new viewers!
-So, aliens, you guys. This episode was, as expected, pretty silly, but I kind of liked it? It was a different enough case of the week that I wasn’t bored and my love for Erin Way (RIP Alphas) certainly didn’t hurt anything. Plus, I appreciated the recap of the whole key business, Juliette finally coming around, and Renard continuing to be a pretty good ally for Nick.
-If you’re wondering where Hank is/was, Russell Hornsby injured his Achilles tendon recently. Will he be well enough for the finale? Not a clue.
-The way Monroe said “Oh…okay” after Nick told him to open the door to the hunter’s trailer tickled me. Runner-up for best line/delivery: Rosalee’s “We’re gonna need a bunch of stuff we don’t have” while in the cabin.
-How will the officers explain seeing the dead body transform from a (whatever he was) into a human being?
-Next week on Grimm: Nick discovers a muse-like Wesen, while Juliette arranges a dinner date and Rosalee takes her first visit to the trailer.