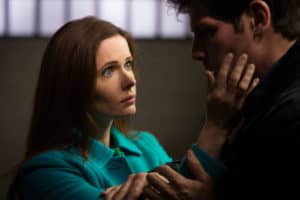 Nick and Hank are at a coffee shop catching up after the latter has returned from his trip to Hawaii. He tore his Achilles while ziplining with his ex-wife Nadine, but before Nick can find out anything more, there are gun shots across the street at Nolen’s Books. While Hank calls for back up, Nick rushes in and finds Evans Childs, noted author, slumped over the table at his book signing and bleeding badly. He follows yelling he hears and finds someone named Anton manhandling a woman named Khloe that he’s obviously familiar with. When Anton sees Nick, though, he makes a break for it and heads to the roof, where he finds a safe place to jump and lands in the river below.

And doesn’t come up.

Anton pops up down river and scurries off to safety, leaving Khloe back at the store. The two are exes of about six months and Evan was her new boyfriend, though she didn’t date them both at the same time. Anton just wouldn’t (or didn’t know how) to let go and kept coming to her, telling her that Evan wasn’t good enough for her. She then kisses Nick’s hand, causing Hank to needle his partner just a bit. The time for laughter is short, though, once they get a call that Anton’s loft in the southeast part of the city has been located. There they find just how deep his obsession/infatuation with Khloe ran, as her face was on nearly every piece of art that he had created. The one she wasn’t in? A drawing that showed Evan Childs, having been shot to death.

Nick takes the drawing and goes back to see Khloe, this time at her place. She’s not surprised at the content and tells Nick that it’s been a couple of months since she was at the loft. After informing him of her thing for artists and people who see the world differently, she passionately kisses him, following that up with talk of how what she has can’t be controlled and how that type of love is not how her relationships end. She prefers it that way, though, and images that her men do, too; a long life of banality is much worse than a wild, short-lived existence, in her mind. She senses the type of passion, ambition, and power in Nick that she’s found in other men that she’s been with and woges in front of him, revealing a light blue elf-like creature with glowing eyes. Khloe then panics at the thought of being with a Grimm until he manages to calm her down.

Juliette is washing her hands and sees the three scratch marks on her left hand, the ones from Adalind’s cat. They trigger another memory of Nick, this time when he told her of Adalind being a witch, and she decides to invite him over for dinner, interrupting his case in the process. However, he had already agreed to share veggie steaks with Monroe at the same time that night and the Blutbad gets annoyed when his friend decides to ditch him without notice. Nick’s time at Juliette’s doesn’t get that well, though, as he can’t get Khloe out of his head – literally, since her voice echoes in his mind and he has visions of her in the window. He decides to call it a night and leave Juliette’s before she has a chance to update him on her memory situation and apologize for what she’s put him through. When he gets back to Monroe’s, he’s incredibly testy and combative, informing his friend that he doesn’t like to be grilled when he comes home and telling him to get a life before leaving once again.

Through a series of phone calls, Hank gets up with Nick and the two go to a local bar, where the latter is busy drawing the Wesen that Khloe turned into. Another patron stumbles over and compliments the sketch, eager to show it to his girlfriend, a fan of all things science fiction. Nick punches the man in the stomach and the two get into a scuffle, broken up by Hank, who sends his partner out of the building. He then joins Rosalee and Monroe in Marie’s trailer, marking Rosalee’s first time around the weapon cabinet and books of Wesen encounters. The trio locate the Wesen that they’re looking for – a Musai. The entry, from 1888, tells of Gaugin being concerned that his friend Van Gogh was under the influence of a prostitute named Rachel, who had been acting as his muse. Eventually, she began to take a toll on him and caused him to cut off his ear. Her kiss is said to have a psychotropic effect with no medicinal anecdote; instead, the only way to snap out of the trance is for true love to be brought into focus.

Back at the shop, Juliette convinces Monroe and Rosalee to let her go alone to see how much she can remember about the night she was there with Nick. Eventually, she finds a memory of her first time in the trailer and hears Nick talk again of Wesen, Fuchsbau, and Blutbaden, which ends up making her feel different. Not good, not bad – just different. She didn’t believe him then, but after everything that’s gone on, and given how Monroe and Rosalee believe him, she’s starting to come around. She asks to see him so they can talk about what she saw, only for Monroe and Rosalee to tell her of his current mental state being compromised by another woman. However, they inform her that she’s the key to getting him back from the brink and take her to the station, where Anton has been arrested and Khloe brought in for questioning following an altercation with Nick at her home. Her thing is to make each new lover kill the old one, which she tried to get Nick to do, yet she denies any wrongdoing when pressed by Renard. While she’s eventually let go, only after being threatened by the Captain should she decide to stay in Portland, Anton is held at gunpoint by Nick. Detective Burkhardt is talked down by Juliette, who finally gets him to look at her and break the hold that Khloe had over him.

Additional thoughts and observations:
-Khloe looked like a close-enough-approximation-but-not-carbon-copy-of the creatures from Avatar, right? I like having her be such a different looking Wesen, but the resemblance was uncanny.
-I don’t know what it says about me that I thought Anton’s street art of Khloe, done in bright primary colored paint he stole, was beautiful. Someone needs to do that for me, although my kisses don’t have the kind of effect hers do.
-Next week on Grimm: Nick and Hank investigate suspects that rise from the dead, while Adalind’s in the middle of a feud between Frau Pech and Stefania and Julieette presses Monroe for more information on the Wesen.