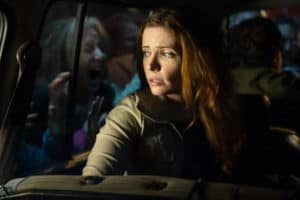 Nick and Juliette nervously spend their first night together since she got her memory back. He tells her that he would have been more honest about who he really is, except that he didn’t know how to tell her or if she’d be prepared for something like this. After she expresses her forgiveness and the two tell each other that they’re still in love, they can breathe easier and end up having what Nick calls the best night of his life.

Meanwhile, across town, Baron Samedi has unleashed the hoards of victims he’s acquired since arriving in Portland. Following a ceremony where they all gathered around a circle and he chanted, the voodoo priest wishes them all “bon voyage” and sits back to admire his handiwork. The crew of undead terrorize Portland by assaulting townspeople and causing a large amount of property damage, resulting in a slew of 911 calls and population driven to the indoors for the time being. Unfortunately, this means that any plans Nick and Juliette had of spending a day together are shot, since Renard calls requesting that he come in.

Monroe and Rosalee have a nervous night of their own, only theirs is less about unfamiliarity and more about finally getting the chance to be alone, as Renard gets a call from his man in Vienna who looked through Eric’s desk. The Captain is informed of the three files found, including one with the name Thomas Schirach, and is sent photographic proof of their existence. Among the documents are death certificates and passports, but there are no photos to speak of.

Nick arrives at the station where Renard fills him in on Eric’s arrival, their unstable family situation, and the files he’s been informed of, including the one he’s most worried about – Thomas Schirach. He’s to have dinner with his brother later that night, but Renard knows he can’t trust him, not when the key is still out there and not when he actually made the trip to Portland. However, before Nick can delve in deeper to the latest threat to hit the city, he has to take care of the current threat in the mass assaults happening downtown. More importantly, Lilly O’Hara is missing and turns up at a diner, where she and a truck driver named Al began their path of destruction. Nick and Wu trace the two to the upstairs part of the building and while Wu gets taken out by Lilly, thanks to a bite on the leg, Nick follows her until she jumps out of a window, lands on a cop car, and scampers away, seemingly unhurt. Al, meanwhile, is subdued by Nick and with the help of Hank, loaded into the car and taken to the spice shop.

Once there, Al is handcuffed and placed on a bed while the gang looks for information on Baron Samedi and the trance-like states his victims are in. Rosalee finds the exact trance of the victims and the cure that should help them – a slowed down central nervous system. They’re all in the fourth stage of the trance (erratic violence, which leads to murder and mayhem), the only stage where a cure could take hold, and she brings out an instrument with three needles that can administer the three injections of antidote necessary for survival. However, as the doses take a while to prep, saving Portland will have to wait. Until then, Nick and Hank leave Al with Monroe and Rosalee, who immediately begin mixing up as much antidote as they can.

Al wakes up and becomes extremely violent, especially since his legs aren’t bound, but Monroe punches him in the face, giving Rosalee enough time to administer the first dosage. While Nick and Hank follow the lead of the Buick Centurion, which they trace to Richard Mulpus, Renard and Eric have their meeting. Eric tries to convince his brother that he should come back into the family fold, even giving him extra time to find the key; however, Renard is understandably hesitant, if not for his past frustration with the royal family than due to the tension with Eric, punctuated by pointed barbs thrown at one another.

For the second time, Al wakes up and this time, he’s cured. Scared, of course, but still, whatever Rosalee cooked up worked. Meanwhile, Nick arrives home after the Buick turned up candles and voodooÂ paraphernaliaÂ  and begins telling Juliette about the case he’s working on. He can’t stay long, not when Monroe calls about Al, and Juliette wants to come along with him and learn on the job, so to speak. They arrive at the shop and Al tells Nick all that he knows about what happened, including the sensation of being in hell, a big black room full of moaning, the color green, and a horn, possibly from a truck. Juliette’s vet experience gets her the chance to work on the case, as she’ll be tasked with giving injections.

They arrive at the shipyard and begin looking at all the green storage containers, all the while Baron Samedi is on top of one of the other containers. He lets a first batch of undead go and they charge on Nick and company, though Rosalee and Juliette administer the antidote quickly. The Baron then opens other containers and gives the gang an overwhelming number to fight off, resulting in them making a run for the car. Nick, however, stays to fight, especially when he spots the Baron and climbs the ladder to go after him. Nick chases him until they arrive on a storage unit and fight, the Baron’s cane doubling as a sword. The Grimm holds his own, though, and the two eventually crash into another container, filled with candles, boxes, and a gray coffin-like unit that has a handful of papers in it – Thomas Schirach’s. With Nick’s photo inserted.

Nick gets shot in the face with the Baron’s acidic saliva and is then loaded into the coffin-like box, where Eric (who arrived right after the shot) closes the door.

The Witch is Back
Frau Pech concocts a special potion using ground up bugs and uses it to spike Adalind’s hotel room service, which leaves the Hexenbiest crumpled on the floor and in a state of unconsciousness. Once there, Pech uses a needle to extract fluid from the back of the young woman’s neck, injecting it into a small vial before drinking it all in. What results is a body switch – rather than Adalind being on the floor unconscious and Pech being alive and mobile, it’s the other way around. Pech now looks, sounds, and acts like Adalind, while Adalind looks like Pech, giving the Frau the cover needed to go see Stefania.

Pech-as-Adalind meets with Stefania where the two talk about how the latter plans to kill the former. Adalind needs the heart of a living Hexenbiest cut out in order to regain her powers, so Stefania tells Pech-as-Adalind that she plans to invite Pech over under the guise of finding a buyer for the baby before having one of her sons strangle the other woman. Pech-as-Adalind asks incredulously if Stefania really thinks that would work and shockingly, it does. Stefania knew that the woman before her wasn’t Adalind and gets her sons to cut the heart out of Pech-as-Adalind, restoring Adalind’s powers in the process.

Additional thoughts and observations:
-I was very much into this episode until the last couple of minutes. Why did they use the Schirach documents with Nick’s photo and place him in a shipping locker/coffin along with them? Are they going to say that they killed the Grimm and look for a reward of some sort? (We’re all in agreement that, given how he watched Eric leave the hotel, Renard likely played a part in this, yes? Perhaps as a way to get back in with his family, something he always wanted?) What type of revolution is Eric trying to start through his association with Baron Samedi? Why is Thomas Schirach such a threat?
-That being said, the Frau Pech/Stefania final meeting was really fun and genuinely surprising. I assumed that their tiff would spill over into next season and last until Adalind had the baby, but for now, Stefania’s in the driver’s seat.
-Rosalee is currently in possession of the key, as Nick gave it to her before they left to confront the Baron. How long will it be before the royals know that Nick/Thomas doesn’t have the key? Will they then come after Rosalee?
-So, season two: better or worse than season one? Overall, I go better – season two hasn’t been without its faults (Juliette’s amnesia went on for way too long, a lot of vagueness about the serialized plot), but I think it had some pretty high highs and felt more self-assured. Plus, the finale was much less frustrating than last season, which makes me think that season three will be in a position to hit the ground running.
-Thank you guys for reading my Grimm coverage this season. I’m not sure if I’ll be the TVOvermind-er in charge of recapping all things Wesen next season, though, since I cover a show that will be airing against it in the fall. If I can find a way to make it work, we can reconvene sometime this September and figure out what the heck is going on in this show together.