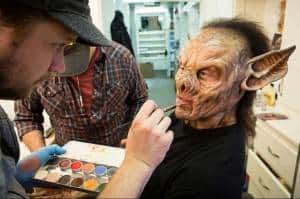 Grimm‘s visual prowess was one of theÂ strongest elements of its promising firstÂ season. Whether it be from detailed props, moody lighting, or impressive makeup, theÂ show tended to execute its vision for a world where monsters ran amongst us quite well. And now, we get a little look at what goes into creating the ambiance that made theÂ show one of the most distinct newbies lastÂ season.

In aÂ series of videos, theÂ show’s creative team is given theÂ spotlight and the result is a better understanding about their intentions onÂ specific episodes lastÂ season. For example, the only color in Aunt Marie’s book is in the eyes of the blutbad and a weapon in “Bee-ware” contained Jules Verne influence, with theÂ stunt work becoming a little more complex with the evolution of Detective Nick Burkhardt. Once given a little more attention, the details of the process (the prop Monroe heads, the drawings of children in aÂ snake’sÂ stomach) become a little macabre, but Grimm works best with a core of darkness at the center each creative decision.

With promises of bigger and better in the upcomingÂ season, the Grimm creative team look like they’ll continue being theÂ show’s backbone for a time to come.

TheÂ secondÂ season of Grimm premieres Monday, August 13th at 10:00, with a move back to its regular timeÂ slot coming on Friday,Â September 14th at 9:00. You can check out the rest of NBC’s fall premiere dates here, as well as the new Grimm eBook,Â spoilers for the upcomingÂ season, and an additional preview for the premiere here, here, and here.

What was your favorite Wesen that Nick came across in the firstÂ season? Did he have a prop that you really took to? What would you like toÂ see theÂ secondÂ season of Grimm add thatÂ season one didn’t have?