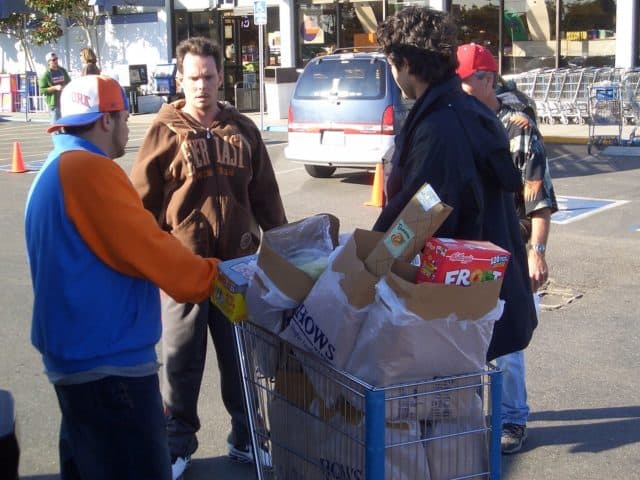 It might seem like an odd thing to think about on a set but any grocery bag you see in movies are made out of a special material that renders them just about silent. I had to look up the particulars and it’s very true, these bags are far more silent than anything you would find in your local shopping mart and still have the look of the regular shopping bags that millions of people use per day. It’s a really weird invention to think about since you would think that there might be filters or something that could even out the sound in a film, but it would appear that it’s cheaper to come up with something that looks the same but is entirely different.

The level to which the props go on a movie set is hard to fathom really. You know that some props have to be used without a doubt since using the real things would be hazardous if not outright deadly. But to think that grocery bags aren’t really grocery bags, at least not in the sense that a lot of people would think, is kind of a trip. The prop master that operates of the site above, Tim Schultz, has been in the business for over 36 years and has worked on many various sets and has done whatever he could to make sure the props were on point and were something that could be used that wouldn’t detract from the show, film, or whatever he was working on at the time.

How he came up with the idea of a noiseless grocery bag isn’t too much of a mystery but it’s the fact that it looks just like a regular bag that’s impressive. That had to be some quick thinking since he’s had to come up with stuff on the spot at times in order to make things work the way they need to. It takes someone that’s been at their job a while and has what they need down in order to come up with ideas like this. And then sometimes it just takes getting lucky and finding something that works. The way Schultz makes it sound in his About section he needed something quick and right that second so he had to be quick on his feet and discover something that could work without error.

It’s easy enough to think that paper and plastic bags would crinkle and make a lot of noise on set but I didn’t think it would be that much that it would be so disruptive. That shows what I know about what goes on with a set. I wonder what other minor and major things are more trademark secrets that have to do with the business that aren’t common knowledge. I get the feeling that there’s way more to finding the right prop and making sure it will work than would fully understood. A lot of folks might think it’s just knowing what will work and what won’t but that still leaves a lot of trial and error to go through.