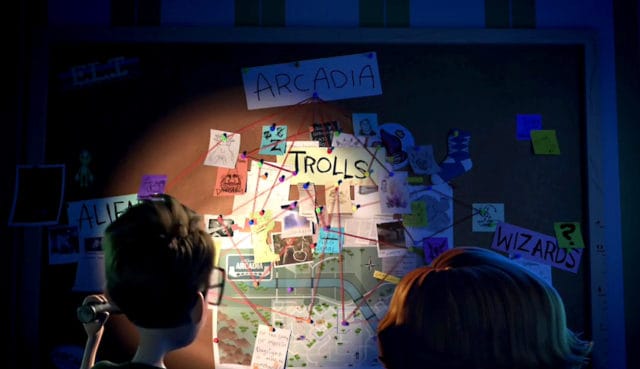 If you didn’t think finding trolls underneath a human town was enough to deal with then you’re in for a treat when the next installment of Trollhunters begins. Guillermo del Toro has a plan in mind that will include 3 Below and Wizards as spinoffs that will continue to explain the connection between them and Trollhunters as the three lean towards what could be an epic crossover of amazing proportions. Of course that part is mostly rumor at the moment but the fact that it could happen is something interesting to think about. The animated world of del Toro so far has drawn a lot of fans and has engaged the imagination of many folks that happen to enjoy a great story concerning magical and mythical creatures.

In some ways the spinoffs are making the entire thing sound like a giant D&D adventure but with extraterrestrials instead of just extra-dimensional beings that you might find in a campaign. Plus, D&D isn’t nearly as contemporary as this story and is not quite as innocent in many regards. Trollhunters has its charms and is a very well-developed story. The idea of a human becoming a Trollhunter is pretty cool and also the novelty of it isn’t lost on a lot of people. Having to rely on someone that’s not a part of your society is something that has become fairly popular throughout the last few decades but has never really gained as much support as one might think. Such an idea is hard to push through to people that want to remain independent and rely on their own, but as it is in the series it needs to be understood that no matter who helps out who, the need to stick together for the common good of all is usually more important than who is sticking up for whom.

It might be interesting to see how these spinoffs are really going to affect Arcadia and whether or not there will be an immediate convergence or if the shows will remain entirely separate for a good amount of time while sharing only minor moments in which viewers will realize that they are in fact connected.

Trollhunters is a great show for a couple of reasons, but one is its diversity and ability to look beyond the known legends and myths that paint all trolls as villains. In this show the trolls are content to live away from humanity and within their own society so as to avoid persecution. But they also live away from their darker counterparts that would seek to bring destruction and chaos if left to their own devices. The division between the two races of trolls is nice in that it offers a different approach and thus the feeling that not all trolls are bad, but not all of them are good either. They’re just as diverse as human beings and can be relied upon as allies if need be.