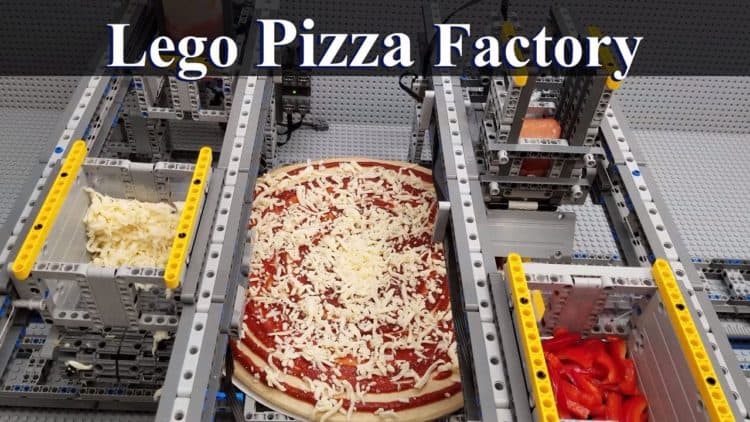 One would definitely have to give points for innovation and for creativity on this project, and plenty more for the fact that it worked. It definitely needs some fine-tuning of course but the fact that it worked this well is pretty cool since apart from being a little heavy on the sauce and kind of uneven, this idea is pretty sound. Now if it was only bigger and was able to be accurate, precise, and able to crank out a dozen pizzas or so in a minute, if not more, then it might be a marketable idea. But then there’s the idea that frozen pizzas are already made so that kind of puts the kibosh on that to be certain. But the fact that this is made out of Legos is even better since it shows that a lot of thought was put into this and that the person responsible is either already an engineer or has the ability to become one since this would take some serious thought as to how to put the condiments on and how to keep the workspace as clear as possible for each ingredient to be added. Something like this is pretty slick since it goes to show that people are constantly thinking up ways to do something creative with the stuff that they have lying around or with materials that other folks happen to see as amusement and not much else.

After watching how frozen pizzas are actually made, at least in one factory, it feels as though this is as close as can be to that process and isn’t too bad for an individual pizza. It’s likely that the builder had to help the machine along a bit, but for something that’s made out of Legos, this is pretty impressive. Pizza is among the many foods that can be mass-produced and yet tastes so much better, at least in the opinion of many people, when it’s made one at a time. Unfortunately, there’s not a lot of money in that unless a person is willing to pay a king’s ransom for each pizza, but a lot of us can probably remember growing up and being excited whenever we were allowed to order a pizza, or make a pizza, or even just have pizza as a school lunch. The dish is definitely one of those that kids happen to like quite a bit and are almost always ready to partake of since it’s not just comfort food, as it can be something that is gourmet, simple and easy, or high-brow and very elegant in the making. It all depends on how a person wants to make their pizza and what they want to have on it since there might actually be a wrong way to make a pizza, but there are many, MANY right ways to make one as well.

It does make a person wonder just how long it took to conceptualize this idea and then to build it since this doesn’t look like the kind of setup that one would simply slap together and call good. The precision that would be needed and the knowledge of how much clearance would be needed might take a little while, and it’s very likely that the delivery systems for the condiments would have taken a little doing since the process is very effective, but also very well thought out since one can think of a lot of different ideas that would be able to do this same thing and yet might not work with the entire system. Just looking at the way everything works it feels safe to say that someone might still come along that would come up with another way to do things and revamp the entire system to make it work in a similar if more efficient manner. The way it’s working at the moment is definitely impressive, but just imagining having to clean the system after every pizza is kind of hard to think about since anyone that’s played with Legos knows that stuff that becomes wedged in each part takes a little bit to get out, and it’s very possible that the entire system would need to be dismantled in order to clean it out thoroughly. That could be a chore in and of itself since one would probably need the schematics available in order to make certain that everything back into the right place so that there would be no mixup. This idea is something that could be pretty cool for a toy idea even, a make your own pizza kit that could be great for kids that love to build and are into making their own meals. It would probably get a bit messy and be used in ways it wasn’t meant for, but at the very least it would be something new.