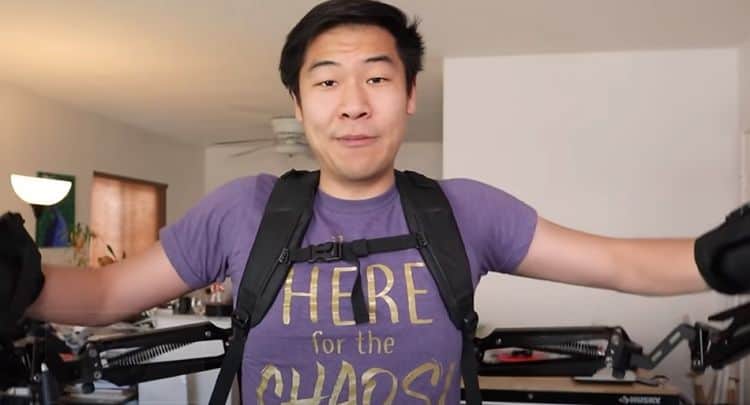 First things first, I’ve got to disagree with this guy about the title of Edge of Tomorrow, which is used as the example for the exoskeleton in this video. It’s a matter of opinion, but All You Need is Kill sounds like a cheesy B movie filled with enough schlock to satisfy those that love low-grade, mass-produced sci-fi. Obviously the story isn’t that ridiculous, but the title, yikes. Anyway, let’s just say that the guy in this video is a little dangerous, even though he’s also kind of entertaining since the whole idea of trying to make a buster sword, or a horse-cutting sword as was used long, long ago, is kind of interesting, but it’s also more than a little dangerous. Not only is the sword simply massive, but the balance is so horrible that lifting it is nearly impossible for someone that hasn’t been lifting and working out for days to weeks to years on end. Watching how a strongman competitor simply lifts the blade from its wooden cradle isn’t as impressive as one might think since it means that the guy who purchased the exoskeleton for $900 (yikes) is a little weak in the arms but has a strong enough imagination to make something work. The exoskeleton is a good idea, but it’s not as perfect as he would like it to be since he’s still noticeably shaky and at one point almost looks like he’s about to take his own leg off.

Giving credit where it’s due, he does manage to lift his blade, but after this, the buster sword is likely to be more of a conversation piece to stick in the garage or his home somewhere since the thing is simply too heavy to swing around as is seen in Final Fantasy VII. The problem with anime, one of the only insurmountable problems anyway, is that the weaponry that’s being used is typically quite large, comically so in some cases, and as a result, if the weapon is going to be solid enough to do some damage, it’s going to weigh a good amount, and the balance is going to be so incredibly off that it would take someone with immense strength to lift it as the guy near the end of the video did. A weapon such as this is more than a little impractical since, in battle, the lighter weapons aren’t perfect but they’re able to dish out more damage over time, while a heavy weapon can deliver it all at once, but requires someone of greater strength and skill to even move the dang thing. Anime makes it look incredibly easy since it’s animated and there’s no effort other than what the story calls for considering that the characters in anime are usually so overpowered that the kind of damage this type of sword can usually use is paltry by comparison.

The creations that are thought up by this guy are pretty cool since he did come up with the metal Hulk hands, which were too heavy for him to wield effectively since the weight of them was just too much. With the exoskeleton though it was a little easier as it can be seen, but it’s still not perfect since one of the arms did suffer a malfunction consider that there’s no power pack and their function is dependent on the springs that power them. Oddly enough though, the amount of tension in those springs keeps his arms up unless he actually exerts force to put them down. It’s funny how that works, but even funnier to think that this guy is so enamored of big, heavy weapons that he can just barely lift, or can’t lift at all. There are likely ways to make the buster sword lighter and maintain some of the integrity, but as it exists in the video, the thing is more of a bludgeon than a cutting blade since it hammers through pretty much anything it touches, making it an effective tool in the right hands, but an unwieldy hunk of metal in any others. Lauding this thing as a horse-cutting blade is kind of funny since those blades didn’t usually weigh more than a person could lift, and were at times defined as polearms, basically bladed weapons that were attached to a staff to maintain distance and still prove effective.

That’s the thing about a blade used on cavalry, the length had to be great enough and the weight had to be manageable, so the pivot point couldn’t be so far forward and some of the weight had to be near the back to make it manageable. The anime blade looks cool, but if this guy wanted to make it easier to lift, he would have made sure to add something into the design that would have helped to lift it a little easier.