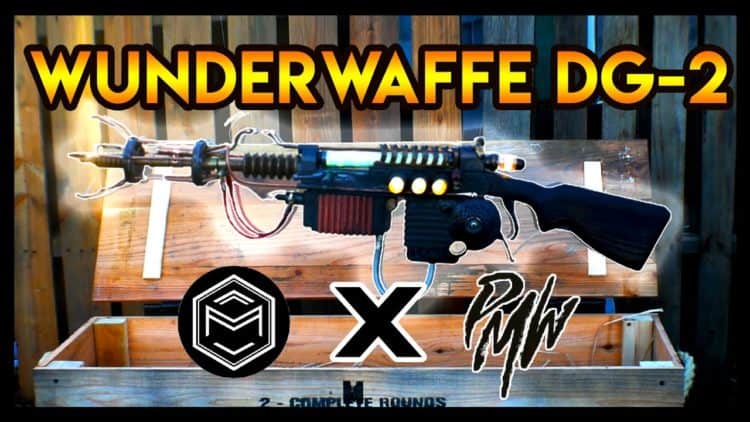 Just so people know what we’re talking about, the WunderWaffe DG-2 is a miracle weapon, as it’s translated from German, that was a designation that was given to many weapons during the same time period, and as you can imagine, it’s the type of weapon that might be seen as highly impractical at this point in time. The idea that anyone actually made this thing and made it function is kind of insane, but unlike the game, this thing isn’t about to work in the same manner since the firearm is meant to release a massive blast of lightning that can drop multiple opponents if they’re standing close enough together. In reality though it can, with the help of a taser, create a very nasty-sounding current that probably wouldn’t do even a fraction of the damage. But the act of turning it into a flame thrower is something that would increase the danger of the weapon and make it less for show. But at the end of the day, it’s still an impressive-looking piece of work and is something that many COD fans would likely love to have in their collection. It’s easy to admit that it would be nice to have all those tools on hand and to have that kind of ambition to make something so impressive, but for a lot of us, the work that would go into this piece might be a little much.

One thing that a lot of people tend to enjoy about the Call of Duty games is that often they’ll adhere to the real look and design of the weaponry that’s been used by the military, but instance such as this show that the game designers not only look back in history to make certain of what they’re doing, but they also have a bit of imagination as well since the term Wunderwaffe wasn’t restricted to a single weapon. ‘Miracle weapons’ were right up there with the idea that Adolf Hitler was interested in the occult and was trying to develop any and every possible measure he could to win the war, no matter how far out it was. This weapon in particular is something that couldn’t function the same way it does in the game since not only is there a lack of a compound that releases this specific kind of energy, the weapon is fairly impractical since all it would take to defeat it is for the enemy to be spread far enough apart that the lightning that it emits wouldn’t be able to arc from one body to another.

It does look impressive though, but it also looks like something that hasn’t been given its final, streamlined form since the loose wires and the cobbled-together look don’t really speak of the kind of stability that one wants from a weapon. In a way it kind of looks either unfinished or like it came from a post-apocalyptic workshop in which the designer only had spare parts to work with and had to make do with what was on hand. The design comes out looking pretty cool to be perfectly honest but in the game, the weapon is far easier to believe than in real life since electricity kind of doesn’t work this way, as anyone with common sense will know. But as an effect in a game, it’s definitely something that a lot of people can get behind since it does the trick. The COD games have been a big part of gaming for a while now and while some of them are celebrated and others not so much, the whole idea that they’re able to keep people coming back even after a bad game or experience is enough to make it clear that they’ve been doing something right for a while.

Unlike other games the weapons that are out of control and not entirely realistic in this game still have a very practical look to them most times since the game itself is something that relies heavily on reality being upheld in some way, at least when it comes to making the game enjoyable. This means that fantasy weapons such as this are typically still able to be recreated in form if not in function, as some fantasy weapons are so insanely big and unwieldy that one can’t help but think that were they actually created in real life, a lot of the weapons in video games wouldn’t be able to be held by most people since they’d be either so heavy, so ungainly, or so over the top in terms of function that they would be deemed as too dangerous for any one person to possess. That’s part of why we like video games such as this though, the weaponry is advanced and insanely useful, but it’s part of the fantasy that people enjoy since it’s not all realistic.