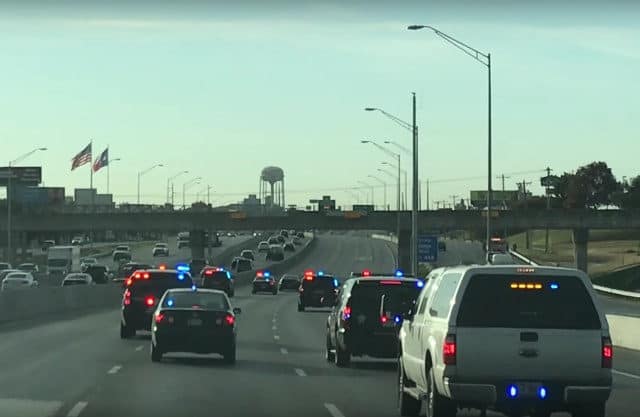 When you hear about a guy merging onto the highway in the middle of a police chase you might think as to why he wouldn’t just wait for the chase to go racing by and then get on the highway. That would be the simple thing to do, but then again simple isn’t always the order of the day. This chase wasn’t exactly the high speed variety however since this particular driver was only topping out at 26 miles per hour. He might have thought the chase was going to zip on by and he’d just merge in, just like a lot of us would. But instead he got to sit in the crawl between the police cars while they took their time to stop and then apprehend the driver of the vehicle they were chasing.

Looking at this clip I can’t really blame the guy for being frustrated since with cops in front and in back of him there’s really nowhere to go, and just blasting by the cops if he got the chance would be a bad idea even if he was doing the speed limit while he did it. Blaming the cops however could be problematic since there’s no telling why they haven’t tried ramming the vehicle to the side of the road. It’s apparent from the driver that the cops had already tried using spike strips and had somehow missed the car each and every time. It’s amazing to think that a long, trailing row of spikes wouldn’t be able to puncture the tires of a car going 30 mph or less on the highway.

The only thing I could think of that would stop the cops from ramming the car to the side of the road would be if there were kids in the car. Just one kid being in the vehicle when it was rammed could be a serious incident. But if there were no kids then it seems feasible that they could at least guide the vehicle, nudging it with their car to the side of the road. Or perhaps someone could overtake the car and get in front of them to force them to slow down. It’d be interesting to know just why it took this many police vehicles and this many officers to subdue a person fleeing from them at less than a regular highway speed.

Police keep catching flak for all sorts of things that they do or don’t do and this should be one of them. The use of so many officers and vehicles for this chase is obscene. Not only would two or three cars have been more than enough, their tactics are so ridiculously outdated that the chase goes on and on until finally the driver must see the futility since they pull over. At that point they’re taken from the car and surrounded by cops as they’re cuffed and then thrown in the back of a cruiser, eventually.

There might be procedure for this kind of thing but there are times when procedure needs to be trumped by efficiency.