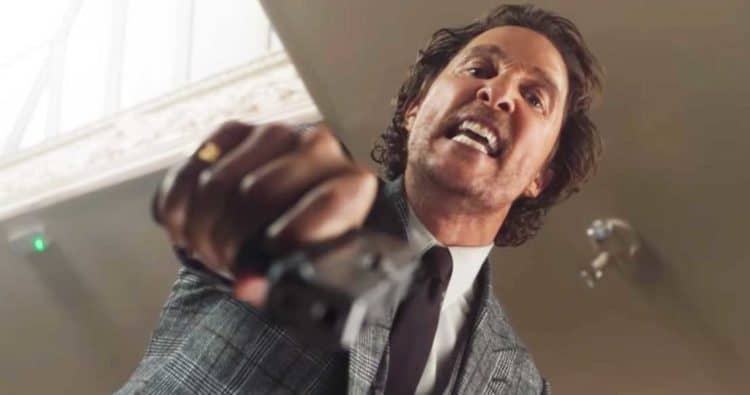 The Gentlemen is a movie that was designed to both intelligent and witty but might have skated past a lot of people despite the great cast it featured. As one of the many movies that were there and gone within a short time, it still managed to rack up a great profit and to even turn the ever-fickle critics’ heads just a bit since the acting was great and the story was definitely worthwhile. But the transition to TV is going to be kind of interesting since the way the movie ended suggests that one problem has been laid to rest, the biggest problem in fact. When ex-pat Mickey Pearson, played by Mathew McConaughey, was attempting to unload his lucrative marijuana business to the highest bidder, it was time for the gears to start spinning as at least a couple of big players were interested in taking everything while giving up nothing. $400 million is a lot of money after all, but it’s far more costly to try and doublecross a man that’s built his business from the ground up and knows when he’s being played, even if he doesn’t always know by who. The movie was highly enjoyable since it was a constant game of knowing just who was trying to outsmart who and realizing that those that believed themselves to be superior in any way were those that didn’t last that long.

With Charlie Hunnam, Henry Golding, Hugh Grant, Colin Farrell, and several other notable actors around him, McConaughey pulled off a very convincing character that was both suave and fully capable of throwing down when he needed to for a scene since his character was the kind of guy that needed everyone to know that he wasn’t weak in any sense of the word. The different feels of this movie, both gritty and polished, made for a nice contrast that might be tough to replicate on TV but is definitely worth the effort of trying. The downside would appear to be that even attempting to get the original cast back for anything other than a cameo would be kind of difficult given how busy a lot of them probably are. While Hunnam and a few of the others are no strangers to the TV scene, since is where some of them thrived for so long, a few of the others are bound to find it difficult to schedule a regular TV series that often. Plus, there are characters that might not be seen anyway since their involvement might begin and end with the movie. Hugh Grant’s character, Fletcher, would be a good example, as would Dry Eye, Henry Golding’s character, who doesn’t even make it to the end of the movie. There’s a chance that the series could revolve around the idea of Mickey Pearson and explore the world of other characters that are in indirect contact with the character, but it’s going to be up to Guy Ritchie and whoever else he brings into the fold to figure this out.

The look at the underworld in this movie is actually kind of entertaining, kind of like Snatch was, and it would be great to see more of it while still staying topside where the polish has yet to wear off. Mickey Pearson isn’t likely to become a huge name in pop culture unless people have seen the movie and are possibly big Guy Ritchie fans. But all the same, some might want to say that McConaughey was barely present in this movie, and they wouldn’t be entirely wrong since he played a much more relaxed role as the kingpin that wasn’t always on the front lines and only got involved when he absolutely had to. He had Raymond, Charlie Hunnam’s character, for the many different things that he needed to be done every day. Hunnam’s character was definitely more prominent since he took on so much more of the action and responsibility, but Farrell was also a gem in this movie since he was allowed to simply let his personality come out in a big way. Bringing all this to a TV show is very likely, but it’s going to be wise to wait and see just what’s going to happen and whether it will be quite the same. The movie actually featured quite a few well-known faces after all, and not all of them, if that many really, are going to make the jump.

However Ritchie decides to do this the hope is that it will be every bit as interesting as the movie since the funny thing is that he pitched this idea as a TV show, to begin with. If the TV show is even half as good as the movie it will be something that people will continue to watch, but it does feel as though it would be better if it were limited to a few seasons at best.