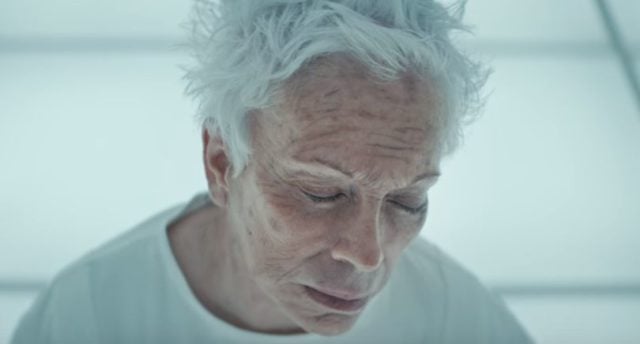 This is a commercial? As in, this is an actual commercial? What’s the object of it, to terrify the elderly? Halo Ice Cream seems to be sending a message but I’ll be darned if I know what it is. Humans need ice cream? Psychotic robots are going to take over the earth and feed the last remaining humans ice cream forever and ever? It’s a commercial that seems to bank on the fact that it’s both terrifying and out of this world but somehow is still geared towards selling a well-defined product. But what else is it really about?

Can you even imagine this scenario? You wake up sitting in a chair in a white, almost sterile-looking room that probably smells of disinfectant if it smells at all, and you’re suddenly approached by a large, square-chested robot that immediately begins to spoon ice cream into your mouth, telling you to “eat the ice cream”. When you try to question it about where you are it repeats the same line. When you try to ask what kind of ice cream it is it repeats the same line. When you knock the spoon out of its hand you are then offered an ice cream cone.

It also drops the bomb on you when it states that everyone you knew and loved are now dead. How’s that for a surrealist nightmare? And then, to top it all off, this is an ICE CREAM commercial. It’s not a new trailer for a horror movie or a funny take on a scifi version of an ice cream commercial. It’s just straight up creepy, and you’re left feeling as though you’ve just witnessed something particularly heinous but also that it’s supposed to be humorous but you don’t know how. That’s a little messed up for even the most hardcore of films, let alone a commercial for ICE CREAM.

Part of me really hopes that this was a spoof of something or just an ill-fated attempt at humor that just bombed out. Otherwise it’s just too depressing. I mean really let’s break it down.

You have an old woman in a chair, sleeping. She wakes up to music, in a white room devoid of almost any other features. A robot bids her good morning and then starts spooning ice cream into her mouth. When she tries to say its good it feeds her another bite. When she won’t eat the ice cream the machine still tries to force her to eat.

When she knocks the spoon away and then asks “Where’s David?” the robot offers her a cone and tells her that everyone she loves is gone, how depressing is that? And then after a product shot you get to see as the woman is surrounded by several of the same model of robot, each one repeating “eat the ice cream”. As they continue their insane litany the woman begins to moan loudly as she has a look of sheer terror on her face.

Everyone screams for ice cream, is that the gag?