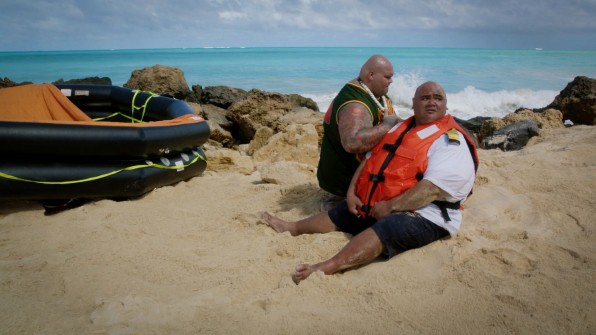 This week’s lackluster episode was a forgettable one for Season 6 of Hawaii Five-0. In a season that’s seen the rise of Gabriel Waincroft’s power, Adam and Kono torn apart, Steve move on from his great love Catherine, and Danny and Grover’s bond with their children grow, this particular episode was nothing special.

A young girl named Addison Wells is abducted while babysitting. Addison was sending correspondence back and forth with a guy online until she found out he was misrepresenting himself (duh), and she cut off communication. Five-0 doesn’t have time to wait for someone to attempt to look for this anonymous ex, so they find Danny’s old pal Toast for assistance. Turns out Toast has done very well for himself since we last saw him. He transformed from the weed-smoking hacker we first met into a tech billionaire. He created an app game which is so successful that even Danny’s kids play it, and evidently have racked up quite a bit of money on his credit card with those bonuses.

Addison’s stalker turns out not to be her online ex. Toast goes to an old frenemy who, when pushed by Jerry, gives them a name for their potential target. Jacob Holm is his name and exposing criminals, other than himself, is his game. He was locked up for exposing corrupt practices at his former law firm. Now he wants to kidnap people and force them into confessions before he kills them. Got to hand it to Addison, she puts up an exceptional fight against her captor until Five-0 shows up. The lead in to this storyline was more suspenseful than the actual conclusion. Even Toast’s reappearance lacked lackluster. Better luck next time with this story.

Kamekona launches his latest enterprise, a Booze Cruise. Steve was supposed to serve as Nautical Consultant, but was called away to deal with the Addison Wells case. Kamekona, Flippa, and Max decide to take the boat out without him. They get lost quickly and have no working communications, and they accidentally use their only shot from the flare gun on their sail. The three end up stranded on an island after the boat sinks, they believe to be a ways away from Oahu. They make a fire and wait to be rescued. What they don’t realize is that they are only on a deserted beach on Oahu. Fireworks wake them up, and this error makes me think Max should stick to bodies, not directions.

Would you have liked to see more depth to the shipwrecked storyline?

Kamekona, Flippa, and Max have a Gilligan’s Island adventure on Hawaii Five-0.