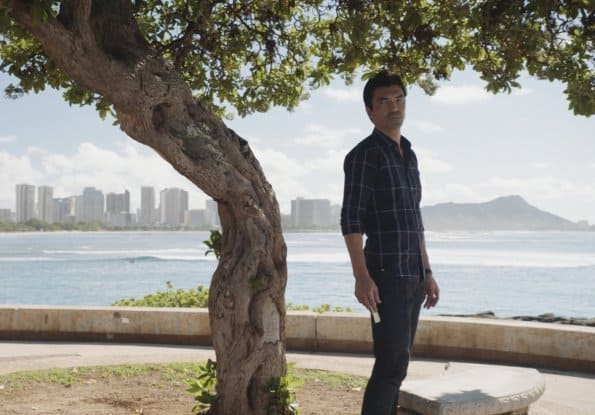 When Adam first came back to Hawaii Five-0, it was incredibly frustrating to watch him hang around with his Five-0 friends and never be offered a position he seemed so qualified for. But this idea is much better. Putting Adam in charge of his forming a new, specialized task force is a stroke of brilliance. It utilizes his experience in the most positive way. Adam hasn’t just been looking for a job or a career, he’s been looking for something that gives him drive. He watched his wife find her passion, so it was only fair that he find his. Plus, McGarrett really, really needs help catching whoever orchestrated the executions of Hawaii’s top criminals, and an FBI agent.

Because Adam knows that world, he knows exactly what to instruct a recruit to look for. But he can’t go in himself, as he repeatedly, publicly renounced his claim to his family’s legacy. He needs a fresh face, like newly paroled Jessie, to infiltrate that world. There’s not much Adam can do to convince Jessie if she doesn’t want to take the risk. But Adam is the type of guy who is willing to stick his neck out for someone he believes in.

He was willing to do that for Tani’s brother when the kid overdosed. Considering he risked going to jail by taking the kid to Naolani (who herself could have lost her medical license) instead of a hospital, I’d say that proves my point. It’s a good thing Tani shares Adam’s faith in people. Her brother is going to need all of that strength as he goes through rehab.

The only person more persistent than Adam or Tani is Pua. Instead of tracking down CI’s and criminals, he tracks down tools stolen from Steve and Danny’s restaurant. But Pua’s search doesn’t lead him to the thieves. It leads him to a family who lost their home in a wildfire, and accidentally bought stolen tools so they could rebuild their home. After seeing what this family has been through, he doesn’t have the heart to take the tools back. McDanno can always get new tools, if they decide their restaurant is still feasible and not a money pit.

While Adam juggles all of that, Five-0 works what appears to be a grave robbery case. You’d think the strange part of this case would be the kidnapped corpse, but the poor, buried alive security guard is just as terrible. At least his death is normal. Everything about the corpse is a creepy puzzle. From the exotic way that he died (some vague illness restricted to a certain part of the world), to the half a dozen ancient ceremonies Jerry digs up (pun very much not intended) involving dead bodies. Thankfully, the motive for the crime isn’t that out there. It was actually a simple case of diamond smuggling which went awry when one of the smugglers died from a disease. Once Five-0 was able to track down the grave robber on his diamond quest, all crimes were solved. The end just gave a very unnecessary, on-the-nose reference to blood diamonds.

And in the end, Jessie returns to accept Adam’s offer. Nothing convinces a girl of her new boss’s credibility like him being the son of a mob boss, who happened to kill his own brother. That last part’s not a very pleasant part of the story, but if it was enough to convince Jessie that Adam knows what he is talking about, all the better for the cause.

What say you, Five-0 fans? Has Adam found his perfect purpose working against the criminals he was groomed to lead?