Home
Hawaii Five-O
Hawaii Five-0 Review: Adam’s Responsibility For The Back Half of Season 8 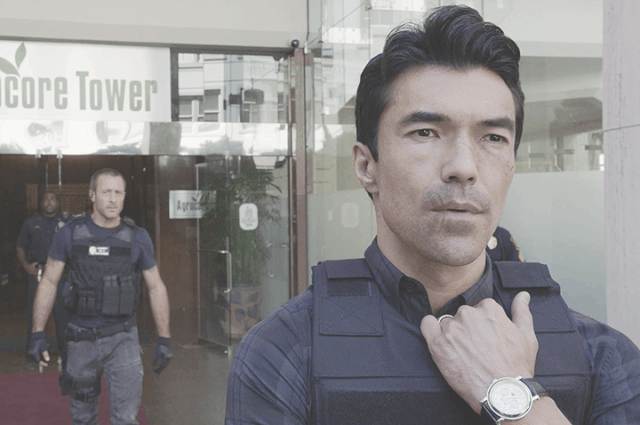 Sometimes it is difficult to tell where a season is going to end up, even as it moves closer towards the finale. The beginning of Hawaii Five-0’s eighth season was about finding a new groove with new team members. By midseason, this task was accomplished. Moving forward, it seems to be about setting things up for a time when Steve McGarrett won’t be leading (McGarrett’s portrayer Alex O’Loughlin has expressed his desire to leave the show soon due to the physical strain of the stunt work). While we have been introduced to some fresh faces, the most likely candidate to take up the mantle would be Adam Noshimuri. Given his past, he’d have an uphill battle gaining the trust of those in legitimate positions of power. He’s got the experience, he’s got the connections, but can he handle the pressure?

Take Adam’s current assignment, which is to smoke out the head of a crime syndicate who ordered the hit on a federal agent. What scares Adam is that this mysterious person is someone the late Michelle Shioma feared, and someone Hideki, the current head of the Yakuza, won’t cross. Adam put Jessie undercover so they could smoke out this mystery person on two fronts, but it’s only made him more reckless and anxious. Adam and Jessie’s plan to prove their worth to Hideki hits a huge snag when the liquid chlorine they steal, and hand over, ends up in a third party’s hand. At least in Hideki’s hands, they had control over the situation. There is no telling what a third party would do with the chemicals. I’m not sure what could be worse. A group of men who know exactly what they’re doing with the stolen chemicals, or a group of men who are so haphazard with the chlorine that they accidentally open a canister and nearly kill themselves.

It is truly frightening that the men who stole the chlorine were ordinary men trying to get justice for their loved ones against a major conglomerate. The case is more successful for Odell Martin (guest star Michael Imperioli) than anyone else. The Hawaiian shirt-donned lawyer finally gets enough cause to launch an investigation into a crooked GMO company and take them to court. But Adam is less grateful for this experience. He’s especially upset when he confront Jessie about going AWOL during this whole mess, and she confesses that she had to get a little more intimate with the Yakuza than Adam planned.

Now Adam is left with all these questions. Did he make a mistake bringing Jessie in? Is he responsible for any headway Hideki makes? Who can he trust? Did he sacrifice everything for a game he doesn’t yet understand? And if he gets the answers he wants, will he have made a difference, or simply been the tipping domino for a sequence of events he can’t change? These are the questions that keep Adam up at night, and make him the most interesting character onÂ Hawaii Five-0 these days.

Will Adam be able to handle the pressure McGarrett has given him, enough to potentially one day lead Five-0?

Could Adam Noshimuri be the future of Hawaii Five-0?