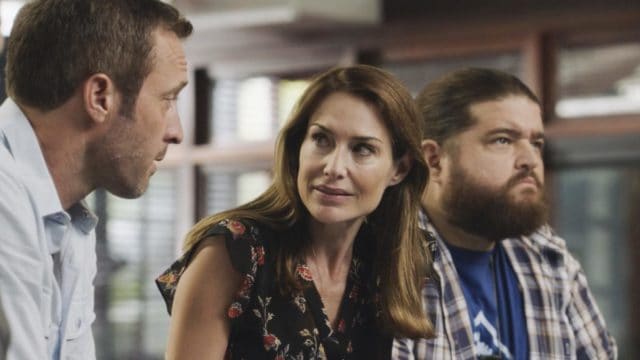 With the addition of Alicia Brown as a consultant to the team, Hawaii Five-0 is talking more about psychology and its effects on the body. Admittedly, the week’s case takes it to an extreme as their killer has multiple personality disorder. On the most basic level, most psychological and psychiatric disorders have a similar root in stress. Stress is not good for your emotional or physical health. Danny takes this point to his own extreme when it comes to his best friend’s health.

It was only a matter of time before the gang staged an intervention for Steve. It probably should have happened years ago, when he first blasted Danny through a window. Back then though, there probably wouldn’t have been as many people participating. Even the dog helps get Steve to the circle. We all know stress is bad for our health. It’s a proven fact, yet we live with it everyday. Danny’s concern for Steve’s life has always been high, particularly because Steve has very little self-awareness. Given Steve’s recent diagnosis of radiation poisoning (on top of the liver transplant he had two years ago), the man’s health could deteriorate fast if he doesn’t make some changes. Limiting the amount of stress in his life is a good start.

Hiring a stress management consultant is not the way to reduce Steve’s stress levels. This is particularly true of throwing someone into the mix who doesn’t have experience with what a “normal” day is for Five-0. It’s also not a great day to shadow Steve when they have a killer with multiple personalities running around town. Luckily, now that Alicia works with Five-0, she helps them get a better handle on this situation. People with extreme psychiatric disorders have to be monitored closely. Oliver Matthus was actually doing pretty well, despite having six other personalities in his head to contend with. When his mother died, his grip on reality broke. His most dangerous personality, his father Patrick, came out to start killing people in retaliation for his pain. After quite a few dead bodies, Alicia is able to figure out how to get through to Oliver. She uses familiar triggers to force the most dangerous personality down, and draw the most docile one back out. She knows that one personality can’t be held responsible for the actions of another, but she found a way to get all of them back into custody.

Alicia is a better person to have around for anything psychiatry or psychology related, and stress would fall under this category too. The person following Danny and Steve around all day was absolutely silly, and a complete waste of Danny’s money. Even he admits that, but he’s not wrong about his concerns for Steve’s health. In addition to the multiple times Steve has been shot and tortured, in the last few years his health has gone from manageable to worse. Danny is as panicked and frustrated as we’ve ever seen him. Who knew Danno was holding so much in? He’s making himself sick worrying about his friend, particularly because he doesn’t think that Steve is taking his health seriously. Steve surprises him, by revealing that for the first time in his life, he is genuinely scared for himself. When you’re young, you assume that, unless a bullet gets you, you’re going to live a long time. This has always been Steve’s mindset. Now he is older, his health is not what it used to be, and he’s realizing what he wants to live for. He’s got people who depend on him, young family he wants to see grow up, and he might not get the chance to. That’s a big if, but the fear is there. The real stress is neither one of them talking about it. For two guys who yell their feelings at each other on a daily basis, they still like to keep a few things close to the vest. Sharing is caring gentlemen.

Eight years into this job, how worried should we be about Steve’s health and his future on Five-0?

Hawaii Five-0 tracks down a killer with multiple personalities, while Danny forces his best friend to take his health seriously.