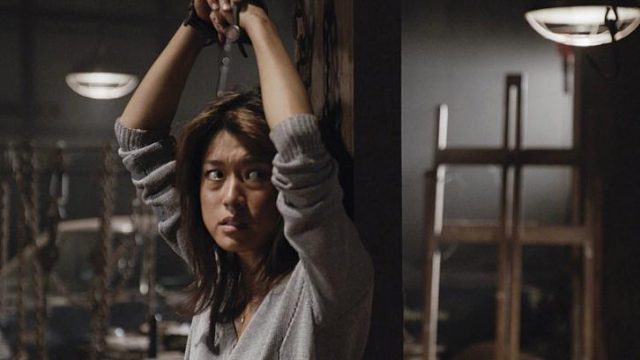 It’s All Hallows Eve in Hawaii. Ghouls, ghosts, and demons don’t discriminate by location. Paradise can be just as scary a place as anywhere else. There’s hauntings, cult killers, and worst of all, hormonal teenagers! Don’t take my word for it, take a lesson from Five-0’s victim of the week. Or just look at Adam and Kono’s life. Poor couple just can’t catch a break. You be the judge of what was the scariest part of this Halloween-themed Hawaii Five-0.

Before we get into Halloween festivities and frights, let’s rejoice that Max has returned. He’s got the biggest surprise of all. Max and Sabrina got married! Mazel Tov and Ho’omaika’i to the happy couple! We want to see those wedding pictures soon. Max comes home just in time to bring his particular brand of Halloween fastidiousness to the party.

Five-0 is called to investigate the death of Marjorie Webb at the exact home of a supposed haunting in 1940. The psychic died of a heart attack, quite literally scared to death. Her assistant backs up speculation that the house was haunted, as does creepy footage appearing to show a ghost in the home when the 911 call was made. Given all of that, there are several rules that should be followed on Halloween. Do not mess with the house’s structure, do not go into the creepy basement, and don’t go into any room alone. Eric breaks all these rules, triggering some creepy effects in the house. Meanwhile Chin and Danny discover that Marjorie hired a convict to dig up a grave. The casket turned out to be empty, save for the etching of Marjorie’s name on the inside of it.

Luckily Eric figures out that the house was rigged up to appear haunted, complete with fake blood and trip wires. A local magician puts the team onto the fact that Marjorie had some questionable jobs as a psychic. She worked with the parents of missing children, claiming she could tell them where their child was and if they were alive. Most of the time she was wrong, which made for a gigantic pile of lawsuits. When the person who bought all the equipment to terrorize Marjorie ends up dead, Five-0 realizes their killer is tying up loose ends. Marjorie’s killer is her assistant. She ran away from home as a teenager and Marjorie lied to her parents that she was dead. The grief drove the father to suicide, which in turn drove his daughter to vengeance. She only meant to scare Marjorie, not to the extremity of death. Now two people’s lives are on her conscience.

While Danny is working the case, Jerry is watching his kids. After the initial fear of Jerry’s costume subsides, Charlie is happy to spend an evening pumpkin carving. Grace is serving out her punishment from last year’s Halloween. She’ll think twice before sneaking out and lying again. Don’t do the crime if you can’t do the time. The worst has happened everyone. Grace has hit her teen years. Boy is she hormonal. Let’s face it, your kid could be a saint but when hormones hit prepare for devilish deeds. The only way Jerry can get through to Grace is by reminding her that she’ll never get back time she could spend with her little brother. Jerry won this night, but this won’t be the last time Grace acts out. Danny has some rough years ahead of him.

Kono takes the day off to spend some time with Adam. Any time they can get together when Kono isn’t working they’ll take. On the road they nearly collide with a bloodied woman. She’s no victim though, she’s the bait. Adam and Kono are knocked out, then taken to what can only be described as a sick cult gathering around a campfire. Adam and Kono spent their first year of marriage apart for this? On top of being held captive and tortured on their honeymoon? The consolation is that Adam and Kono are an exceptionally tough duo. If you’re a death-obsessed cult trying to stay under the radar, the worst people to kidnap are a cop and an ex-Yakuza protegee/convict. Adam and Kono escape their shackles in a shack (yes I’m serious), with an ax in Kono’s case. Just a plea I’m putting out there now: please don’t try that again Adam. Another rule of Halloween is to never seek help from the creepy old guy living in the middle of nowhere. Literally every horror story tells you not to do that! Kono barely has time to knock the old man out after he calls for his disciples. Luckily the phone has enough battery for them to call HPD for help. Kono and Adam have to drop several bodies before they arrive. Worst second honeymoon ever.

Are Kono and Adam ever going to catch a break? At least their marriage isn’t boring. Hopefully Max and Sabrina’s marriage will be mellow.

Max returns with big news, Grace spends Halloween as a scary teenager, and Kono and Adam have an awful 2nd honeymoon on Hawaii Five-0.