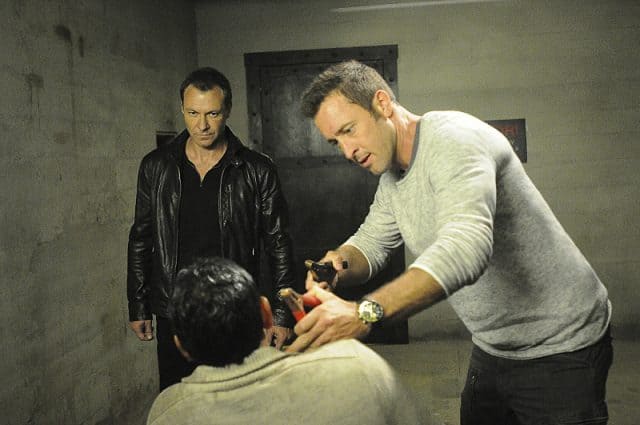 Hawaii Five-0 returned for its seventh season with more than enough action, emotion, and car banter to fill us with glee. Additionally, that touching CGI tribute to the original Hawaii Five-o‘s Steve McGarrett, Jack Lord, should go down as the defining startup for the season. While one chapter closed, a new foe emerged. You can’t say you’ve caught a serial killer if he’s still leaving clues to goad the police. This week 5-0 deals with more acronyms and countries than you can count. At least there’s one thing you can count on to never change. It doesn’t look like Danny is going to stop scolding Steve for taking risks with a new liver anytime soon.

McGarrett was obviously disturbed to find a chess piece, a trophy from last week’s serial killer of serial killers, at his home. To help him understand what this means, he went to an FBI Behavioral Analyst specializing in serial killers named Alicia Brown. She surmizes that the killer is highly sophisticated and actually admires McGarrett. She could be a huge asset to the team, but refuses to come out of retirement. McGarrett isn’t good at taking no for an answer. He leaves his chess piece on Alicia’s desk to give her an excuse to return it. You can’t not roll your eyes that his plan totally works. Alicia comes to 5-0 claiming to be retired but gives them valuable information on their serial killer’s pattern. What’s more, she lets them know a deceased HPD officer was looking into the case off duty.

I’ve made this point before, and I’ll make it again. Chin has gotten so close to his niece, it makes sense for her to stay with him. Sara wants to live with him in Hawaii. Now despite the fact that Gabriel asked Chin to take care of Sara, Chin owes Gabriel nothing. Even Malia wouldn’t want Chin to take in Sara if he wasn’t ready to be a father. Yet it seems that he is ready; not for some idea of a child in the distant future, for Sara.

As if serial killers weren’t enough to deal with, 5-0 has to contend with a foreign agent on their soil. Harry Langford is a rogue MI6 agent. He comes to the island in search of $20 million worth of diamonds. At least that’s what his cover is. He has a run-in with 5-0 when the girl he used to sneak the diamonds out is murdered. Truly the only person happy to see this guy is Jerry, and that’s just because he likes his fancy toys. Langford was actually publicly disavowed by MI6 to establish his cover. He has been looking for the Greystone, a hacking device which exchanged hands between an Egyptian billionaire and a terrorist. By the time Langford has told 5-0 all this, the deal has already been made through a courier. Langford joins 5-0, including Kono in an enticing red dress, make their move at a black-tie event to get the diamond owner to himself. Being dangled over a roof is enough to get anyone to talk. He tells 5-0 that the broker already left for Prague to sell the Greystone. Once in Prague, Danny, Steve, and Langford stop the Greystone from doing serious damage to Europe’s nuclear arms. However, Langford steals the Greystone for his own purposes. It’s not what you think. He’s not a terrorist, he’s a widow. The terrorist who wants the Greystone killed his wife in a mass bombing. Â Thanks to Jerry’s well-placed tracker on Langford, Danny and Steve catch up to him to help him. When someone’s wanted dead or alive, the dead option sometimes feels like peace. With his wife avenged, Langford and the boys make their way to London. They are given high honors by the Queen! That’s alot of traveling in a week!

Was this week a good set-up for what’s to come, or just a little too jam-packed?

Hawaii Five-0 meets FBI meets MI6, and every other acronym, in this week’s action-packed episode.