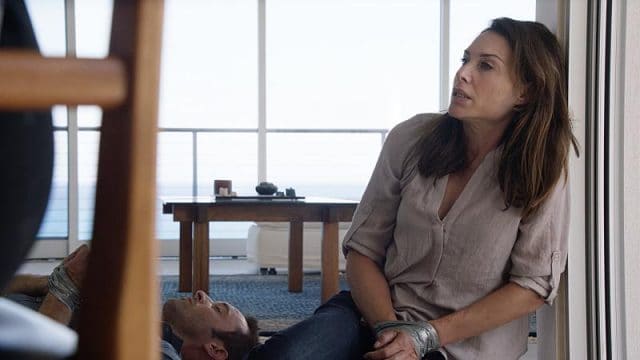 Every few episodes Hawaii Five-0 kicks up the stakes a notch. Not that the show hasn’t been running on all cylinders in its seventh season. I’m still trying to wrap my head around that unbelievable chase sequence in the season premiere. When the show introduced Dr. Alicia Brown as a retired FBI profiler, we expected her to be useful to the team. As it turns out, the team, Steve McGarrett in particular, has been useful to her. This week climaxes the serial killer story which has been built up since the season premiere. Five-0 is pretty special, but the real show was that of serial killer vs. profiler in one of the best psychological face-offs seen in recent years.

We pick up 16 hours after last week’s cliffhanger, when Dr. Alicia Brown and McGarrett realize that they have found the serial killer they were looking for. Clearly something goes wrong because the first scene we see is Alicia being dragged across the ground on her belly with a knife in her back. The killer is Dr. Madison Gray, played by Law & Order Elisabeth Rohm. Backing up a little bit we see Alicia taunt Gray with the knowledge that they have confirmed her patient, Officer Lao was murdered. Alicia finds all the evidence she needs when she breaks into Dr. Gray’s house. But she broke into a serial killer’s house. You don’t do that without a 50/50 chance of walking out alive. Hence how she gets the knife in the back, and McGarrett gets one in the shoulder when he tries to rescue her. Considering Steve just had a liver transplant, that’s got to be hazardous to his health right?

Dr. Gray is meticulous, right down to her pearl necklace and spotless countertops. While she takes care of her victims she sends the rest of Five-0 on a wild goose chase with McGarrett’s phone.Â None of McGarrett’s regular tactics work because Gray has her own sense of ‘logic’.Â While dealing with the blood loss, Alicia has flashbacks to her time at Quantico. Her daughter was at the top of her mother’s class, but wasn’t good enough to save herself. She died at the hands of a serial killer, which is why Alicia put in for early retirement. So while Alicia profiles Gray, Gray throws it right back at Alicia, taunting her with her daughter’s death. Gray doesn’t even blink throughout this exchange, it’s unnerving. Alicia’s good, but Gray makes a good point that you should “Never play psych games with a shrink”. Like I said, Gray is meticulous. Knifing Alicia and McGarrett was done out of in the moment necessity, not her psychotic desire for control. Recall that Gray has been killing the serial killers on the island, but only after they have done her bidding. Meaning that she is going to get two serial killers on the FBI’s Most Wanted List to kill McGarrett and Alicia. Except in this case the killers’ relationship with Alicia is personal. She arrested the male years ago but his girlfriend helped him escape, so this is about revenge.

Serial killers like to play games, right up until the end. Alicia has a horrible fear of drowning (which makes her move to an island make very little sense). She and Steve are dumped in the bluffs where the tide keeps rising, it’s all they can do to keep from drowning. Alicia really has to depend on Steve emotionally and physically. He has to calm her before even thinking about finding a way out of the hole. He even has to revive Alicia when a particular wave is too rough with her. Using kelp as a rope, Steve climbs out of the hole then pulls up Alicia just as Kono and Chin put down the killers. Now I know we all love Catherine, and it’s pretty clear she’ll always be Steve’s soul mate. However, it has been a long time since Steve has had that kind of chemistry with anyone. The chemistry between Steve and Alicia was really raw in this episode, and I wouldn’t mind seeing that explored further. Whatever happens will happen. So long as Dr. Gray stays far away from them, it’s a good ending. Of course catching her and throwing the key to her jail cell away would have been better, but you win some, you lose some.

In other news, Kamekona’s culinary experiments are just a little haywire. So haywire that Grover has to warn Otis Wilson away from Kamekona’s more experimental delicacies. Kono is beaming like crazy now that Adam has been granted early parole. Chin is having a blast with Sara, paddleboarding, watching old movies (nice shout out to Daniel Dae Kim’s time on Broadway this summer). It’s almost time for Sara to go to Mexico, which Chin is coming to terms with so long as her relatives will keep her safe. Everything has come up clean so far, until Jerry finds a link between Sara’s uncle to some drug dealers from a previous case. It could be a coincidence, or could be a huge red flag. Chin reaches out to Coughlin for help reaching out to the Federales so he can be 100% sure he’s sending Sara into a safe environment. Luckily Coughlin and 5-0 have mended fences. He understands the safety of a child is at stake, so he agrees to look into it no questions asked. It seems like this could go either way. In a few weeks time Sara could be gone from our screens, or she could be a permanent fixture in the 5-0 Ohana.

Is there a spark worth exploring between Alicia and Steve?

Steve and FBI Profiler Alicia Brown fall prey to the serial killer they’ve been looking for on this week’s Hawaii Five-0.