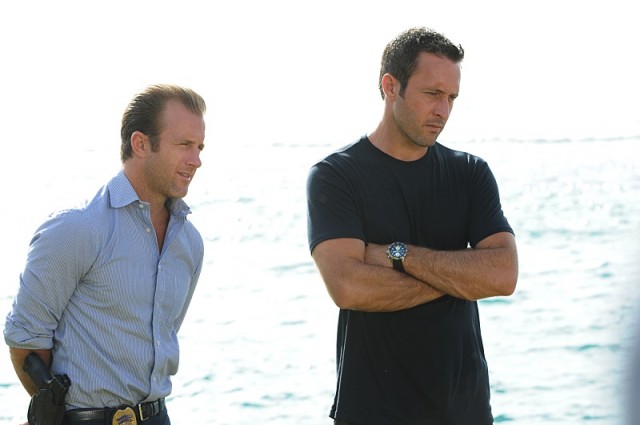 The events of the past few months, and maybe the past few years, come together for a heartbreaking midseason finale of Hawaii Five-0. The team’s enemy makes a daring play, and one member of the Ohana says goodbye.

The whole gang is gathered to watch the weigh-in before the match of Haynes v. Nakano. Luke Nakano is the fan favorite to win on home soil. Even Max is bringing the faith to the match with his menorah and yamakas. I like where Max’s head is at, but unfortunately, it doesn’t do much to help Nakano’s brother Ben when he is found dead the morning of the fight. Nakano is devastated, but he decides to push forward with the fight in his brother’s honor.

Haynes is insistent on two points. The first is that any bitterness he felt toward Ben Nakano he left in the ring, and the second is that little brother Luke Nakano will lose the upcoming fight. Chin and Abby trace Ben’s movements, and figure out he was connected to an armored car heist with an associate connected to Gabriel. Ben was killed to gain access to the arena for the fight, so the team races to stop whatever it is Gabriel is planning. With a few of Gabriel’s guys already inside, Steve has to put himself in Gabriel’s mind to figure out what he wants. For months Gabriel has made his presence known in Oahu, aligning himself with the Yakuza and proving his power to anyone who will listen. Jerry sees that not one, not two, but three heads of crime in Oahu are at the fight unarmed and unprotected, and it would be better safe than sorry to assume that Gabriel is after all three.

In the center, or in the background depending on your perspective, is the match. Luke’s head isn’t in the ring, until he has a vision of his brother cheering him on, after which he gets a second wind and a fighting spirit to win. The trick for the team is to resolve the situation quietly without creating a panic in the arena. They only barely get to their would-be victims, and they can’t prevent at least one from being shot by a sniper. The crowd is undeterred, the noise having masked what really happened. Steve realizes this means Oahu could be the center of bloodshed and chaos in the next few months. Gabriel himself assassinates the head of the Yakuza at the end of the night.

Elsewhere in the episode, Adam decides to take a deal of 18 months in prison for his crimes. Kono takes a break from work to be with her husband on their last day together before he has to serve his sentence. Adam reassures Kono with a story of his grandparent’s three-year separation when his grandfather was drafted to the Japanese navy. Since they went on the live a happy and prosperous life together, Adam is confident he and Kono will be able to do the same. You could hope for a last minute Hail Mary, but instead Adam says goodbye to a tearful Kono as Five-0 is left to comfort her.

How much more chaos do you think Gabriel has in store?