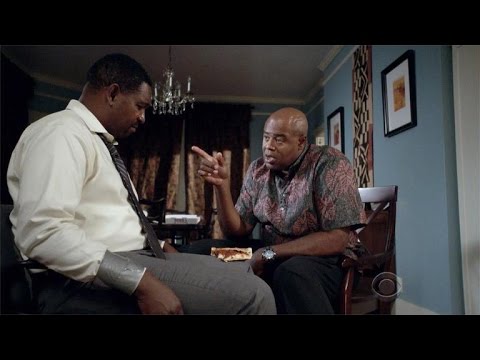 As implied in the title, the show’s story takes place in Hawaii 99% of the time. This episode however, focused on Lou Grover’s quest for justice in Chicago. This week on Hawaii Five-0, Lou flies home to confront a former friend and find a way to arrest him.

Grover returns to Chicago to get a confession from his former friend Clay Maxwell in regards to his wife’s death last fall. To refresh your memory, Clay and his wife went to Hawaii to visit Lou and then Clay’s wife ended up dead at the bottom of a cliff. There was no rock solid evidence that pointed to Clay intentionally pushing his wife, but Lou could see that Clay’s remorse was an act. I have to admit, Lou kind of scares me in this episode. He flew all the way to Chicago with a brutal plan in mind, but was able to multitask helping his son with his homework over the phone.

Clay is as slippery as they come. As soon as he got back to Chicago he made sure to cover his tracks so that he wouldn’t get caught, then promptly settled into a new life with the woman he was cheating on his wife with. With Clay tied to a chair, Lou tells him that since he can’t get him for his wife’s murder, he’ll get him for something else. In an exceptional monologue by Chi McBride, Lou recalls a time when money went missing from a large bust and it was never found. It never occurred to Lou at the time that his partner could have pilfered the money, but now he knows it to be true. Clay hides behind a kind smile and a badge and throws a past mistake (single clue “Philly”) in Lou’s face to get under his skin. Clay taunts Lou’s attempts as futile as Lou tears the house apart. This, and the unexpected return of Clay’s mistress, greatly anger Lou. Lou always seemed like such a teddy bear, but honestly in the moment he threatened Clay to get rid of his girlfriend, Lou seemed genuinely crazy.

Back at home the rest of the team is having fun. They are having so much fun in fact that Steve, Danny, Kono and Chin decide to make a game out of getting back to the office since the local highway is under construction. Steve and Danny decide to go the long way around while Kono and Chin cut across the coffee fields. Chin and Kono get in way over their heads when they are turned around and end up being held at gunpoint. They are forced to dig a grave for their abductor’s victim, who turns out to be a cop. Chin knows as soon as their abductors find out he and Kono are cops they will end up in the same grave. Steve and Danny relish in their victory but become genuinely worried after awhile. So they go off in search of their partners. After everything that’s been going on recently with Gabriel, it’s hard not to go to worst case scenarios. In this case it was good that Steve did since they barely make it to Chin and Kono before they are executed. It was too close a call, and I’m not sure if I’m relieved or not that for once, Gabriel is not responsible for this week’s mayhem.

Back in Chicago Lou continues to search the house with what little time he has left. Clay’s girlfriend Leann leaves for awhile, but eventually returns to the house. Lou has no choice but to tie her up as well. It gives him the opportunity to plant seeds of doubt in Leann’s mind about her boyfriend’s innocence. Hopefully she starts to open her eyes. After hours of searching and quite literally tearing the house apart, Lou does wonder for a moment if he’s ever going to find what he’s looking for. That is, until he realizes that Clay has a rusty old car in the garage and a nice new one outside in the snow. Clay realizes his luck has run out, yet he still tries to bribe his way out. Lou laughs maniacally, then places a call to the Chicago P.D. to turn Clay in. How Lou is going to explain two people duct-taped to chairs in a nearly demolished house I have no idea. You’d have to have some friends in high places to wiggle out of that. Unfortunately, we won’t know the result of Lou’s “investigation” until February.

Was this or was this not Chi McBride’s best Hawaii Five-0 performance ever?

Chi McBride turns out an exceptional performance on this week’s Hawaii Five-0.