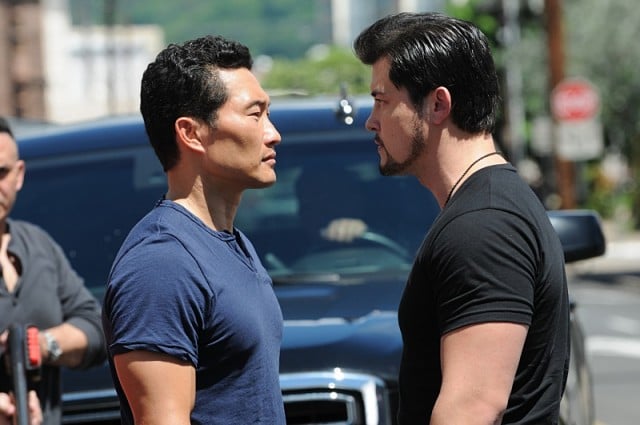 Hawaii Five-0 spent five years building up the history and the menace of a villain that was Wo Fat. If the events of this week were any indication, Wo Fat was nothing compared to Five-0’s current threat.

Five-0 gets a new, temporary member with Inspector Abby Dunn, played by the lovely Julie Benz. Inspector Dunn is in Hawaii for a couple of weeks to shadow Five-0 because she is about to head up a task force in San Francisco based on their department. Jerry is immediately jealous that this new person gets special privileges when he has been with the team for years. I’m not sure Jerry necessarily needs a badge, but I did always think he could use a nicer office.

Inspector Dunn’s first case with the team involves shadowing Chin on a murder and smuggling operation. Both are troubled when they find out the large shipping containers were being used to smuggle in weapons by former Chinese military. She’s good at what she does, and on any other case she would have a real shot at solving it. Except that this isn’t any other case. Â They don’t need to look far for the smuggler, since Gabriel walks right up to Chin and confesses.

A Bonnie & Clyde style thief team has their crime spree abruptly ended when ‘Bonnie’ is gunned down. In the middle of a scam, Hank and Kate seem to have been targeted because they stole from the wrong person. Steve decides to temporarily release Hank so that he can help them with the investigation. Hank is definitely annoying, but he’s useful and he makes me giggle when he comments on the fact that Steve pretty much took possession of Danny’s car long ago.

The plan seems simple: question all of the people Hank and Kate stole from and locate their items to see what was so valuable enough to kill for. Clearly it was something big enough to kill the owner of the pawn shop where Kate sold the various items. From there they go looking for the one man Hank and Kate stole from whose item is missing from the pawn shop, but this is where things start to go sideways. Hank ends up killing his mark. He comes out looking like a hero for potentially saving Steve and Danny. They realize too late that they’ve been played, but the real reason Hank himself killed his partner and set all of this up is far more shocking than even they could have anticipated. This whole plan was all about uploading a virus onto the Five-0 server, at the request of none other than Gabriel.

As if Gabriel wasn’t embedded enough in this week’s storylines, there are a few more lives he decides to wreak havoc on. Adam and Kono finally have to deal with the debt they owed to escape the Yakuza. Upon failure to deliver Gabriel to his debtor, Adam is whisked away to the woods to be killed. He doesn’t believe any assurances that Kono will be safe after his death. After a bloody battle for his life, Adam plans on leaving the country. He doesn’t even get out the door before more of the Yakuza arrive to take him to his debtor. It looks like the end for Adam until Gabriel comes out of the shadows to inform him that he paid Adam’s debt, and then some. Gabriel made the deal with the Yakuza that afternoon, so Adam’s little trip out to the woods was just a miscommunication in timing. Adam is horrified to realize that he killed two men for nothing. Anyone else would just count their blessings and try to work through the guilt, but that’s not Adam. In his mind, Gabriel’s actions don’t justify his own, so he turns himself into the police for murder.

Is Gabriel shaping up to be one of the show’s most menacing villains?