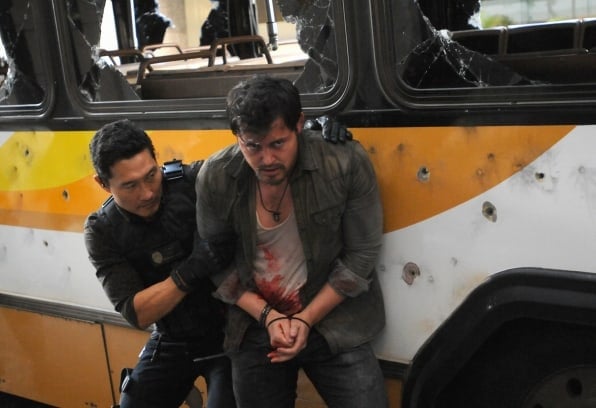 Hawaii Five-0‘s sixth season finale had its usual brand of danger and comedy with a few interesting twists thrown in for good measure. The criminals all either died or disappeared, and one very particular criminal got what he claimed was closure. Can any of them be trusted though?

A meth epidemic is quickly running rampant on the island. A junkie of all people shoots Gabriel, who is hiding out in an abandoned warehouse. Gabriel is actually grateful when Five-0 shows up because he is both injured and in need of rescuing from Michelle Shioma’s people. Five-0 has to shoot their way out of the building, but without backup they are on their own. Shioma turns the city into a warzone in a matter of minutes. She dispatches an army of mercenaries to kill Gabriel and Five-0 if necessary, as well as head off SWAT so they can’t help Five-0. Abby manages to overtake her captor long enough to get to Grover. Steve does everything from jumping between buildings to commandeering a bus to get Gabriel to a hospital (and no, he doesn’t let Danny drive). With a little luck, and little bit of Grover, and a whole lot of Jerry as their eye in the sky, Five-0 makes it out alive. After everything he’s done Gabriel doesn’t deserve much sympathy, but you have to admit going through all of this while bleeding profusely from a gunshot wound is not easy.

While her friends are under attack Abby works fast to plug the leak in HPD’s communication. Only a mole could have tipped Shioma off to everything Five-0 was up to. Abby goes to Coughlin for help. At first he laughs at the irony, but when she mentions Gabriel he shuts up and cooperates. Nothing motivates a man more than the idea of getting justice for his brother. Coughlin discovers the mole is the sister-in-law of the prison guard Shioma paid to get Adam “accidentally” released. By this time witnesses don’t matter, since Shioma is already in the wind.

I was actually surprised that Chin did not take responsibility for his newfound niece Sara. Instead he chose to let child services find her a good home. That’s not what Gabriel wanted though. As much as he hates Chin, he loves his daughter. Most importantly both Chin and Gabriel both Malia, and Sara is her spitting image. Gabriel does not survive his injuries, leaving Chin with an important question to answer-is he ready to be a father?

Now honestly, Five-0 could have stopped right here and I would have been thoroughly satisfied with Season 6. How much more of a brilliant, twisted irony can you get than the worst villain Five-0 has had being brought down by an accidental wound? Then Peter Lenkov had to go ahead and bring it full circle with an unbelievable callback to Steve’s personal villain Wo Fat. No sooner has Steve been able to catch a breath from his latest brush with death before he is brought to a CIA black site. What does he find there? None other than Wo Fat’s father, who forgives Steve for killing his son. It’s an interesting one-off, but also a terrific jumping point for finding Doris McGarrett next season, should the writers wish to go that route. 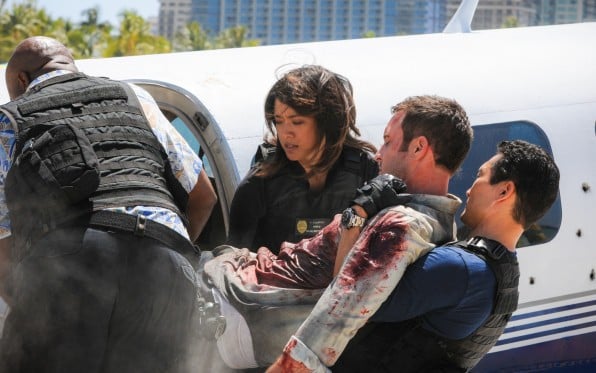 Remember that little meth epidemic briefly introduced in the last hour? It also comes back around. Steve has a strong conviction to catch the drug dealers filling the streets with this garbage after one of Nahele’s friends dies as a result. Kono hilariously destroys the drug dealer’s car once he’s found, which gets them to the dealer, which gets them to the maker of all this product. As if this hour wasn’t great enough, Sung Kang (Fast & Furious franchise) plays Dae Wan, the head of this drug syndicate. I will now take a moment to bow down to the Five-0 writers’s genius. While posing as pilots to smoke out , their plane comes under heavy fire in the air. Steve is badly injured and Danny is forced to break his cover to help them all survive.

Most of the two hour finale has typical Danno/McGarrett moments in which Danny screams how much he hates Steve for his crazy ideas that have about a 50/50 survival rate. Danny is at his best when he’s defending his family, and Steve would certainly qualify. Danny manages a risky landing with the damaged plane then has the satisfaction of catching Steve’s shooter. However, Steve requires a liver transplant. Of all people Danny is Steve’s blood type, so donating his liver to Steve will officially make them blood brothers. And Danny will never let Steve forget it so long as they both shall live.

Nothing but pros for the two-hour season finale. There was a perfect mixture of danger and comedy which is trademark of the series. We’re also left with a few burning questions: Will Chin adopt Sara? Will Adam be back following his sentence? Will Steve’s past affect his future. We have a good four months to think of the answers.

Hawaii Five-0 Season 6 Episodes 24/25 Review: "Pa'a Ka 'ipuka I Ka 'Upena Nananana (The Entrance is Stopped With a Spider's Web)/O Ke Ali'i Wale No Ka'u Makemake (My Desire is Only for the Chief)"

Hawaii Five-0 ended its sixth season loud, strong, and with plenty of its brand humor.