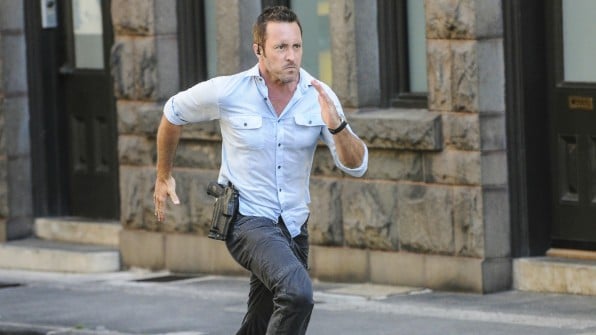 Welcome back to paradise everyone! It’s been a long summer without the Five-0 task force. The team is officially back and they haven’t missed a step. Picking up a few weeks after Danny and Steve’s liver transplant, things are looking up. Danny and Steve are all healed, Abby is officially apart of the team, and Kamekona is still working on expanding his franchise. The state of Hawaii also has a new governor, Keiko Mahoe. More than six years at this gives everyone pause to reflect on where they’ve been, and perhaps provides some clues as to where Hawaii Five-0 is going.

Why would Danny and Steve let a little thing like a liver transplant keep them from running round like kids? They celebrate their release by competing against each other in a wheelchair race, treating the hospital like their playground. The adult in me wants to scold them for disturbing a professional work environment and damaging important equipment. It’s just too great to see them bounce back, now officially blood brothers!

Though Chin is planning on putting his niece up for adoption so she can have a proper family, he’s gotten very close to Sara. To say they’ve hit it off would be an understatement. Chin adores that little girl. He is visibly disappointed when social services tells him they have located Sara’s remaining family in Mexico. Before Chin feels comfortable handing her off, he needs assurances that her new home will be a safe environment. One of the perks of law enforcement is calling in a favor to run a background check. Chin openly admits taking care of Sara has him seriously considering if fatherhood is in his future. Might that family be with Abby, or should Chin consider keeping Sara? It was Gabriel’s dying wish that Chin look after her. Let’s be clear, Chin owes Gabriel nothing after everything that man pulled. Gabriel’s crimes don’t extend to Sara. She is Ohana, so maybe she should stay. At the end of the day it will be about the best environment for her to grow up in.

Day 1 out of the hospital Danny and Steve are right back to work. How can they not when someone literally leaves a body on their doorstep, or more precisely, in their office. With Max still away doing relief work, his new associate Noelani assists Five-0. Perhaps this is the girl who finally gives Eric the time of day. They both help Five-0 figure why a body was just dumped in their office. Not even an hour into the case Danny starts in on Steve. Danny is going to berate Steve into taking care of his new liver, which means following all post-op instructions. Not operating heavy machinery is one such instruction. This leaves Chin to drive the arguing toddlers around.

They find the primary crime scene where their victim, Anthony Hane, was murdered. A quick inspection of his home gives them a clue which leads them to a hotel. There they find four tourists dead with their eyes gouged out. Their victim was a serial killer. Based on the sick recordings Hanes made of the murders and promptly emailed to a friend, the theory is that Hanes had a partner. Five-0 finds that partner, dead in the backseat of Grover’s car. Their new victim, David Larsen has an ivory carving in his mouth similar to the one found in Hanes’ mouth. Jerry finds out the carvings were actually shaped into chess pieces, and the original chess set was suspected to have been stolen years ago by a man named Pierre Shaw. It’s no coincidence that Shaw was recently paroled. In a truly stunning stunt sequence, Steve and Chin give chase to Shaw right into the heart of the city. Seriously, I can’t say enough good things about this stunt sequence! So much of its brilliance comes from Shaw’s parkour skills. If you see nothing else of the episode, watch that sequence, which takes up a full five minutes of air time.Eventually Shaw traps himself in a busy upscale hotel. Five-0 has no choice but to lock down the building and all of its 1500 guests until Shaw can be caught. If Hawaii didn’t have worries about scaring away tourists already, they sure do now.

SteveÂ severelyÂ overextends himself which lands him on the ground bleeding. Now Danny is completely justified in chastising Steve for hurting himself. We all know this arguing comes from a place of love. These two are adorable the way they say “I Love You” and then scold each other. This beautiful moment isn’t going to keep Steve from doing his job. The teams traps Shaw on the roof before he can hurt anyone else. Shaw overestimates his own skills and accidentally plummets to his death. Case closed, Steve does something completely out of character and decides to go home to rest. He must be exhausted to actually give in to post-op care. The danger isn’t over though. When Steve gets home he finds what appears to be a piece of the ivory chess set from their case in his kitchen. Did Five-0 really catch their killer, or is the threat just beginning?

The action, the relationships, and the season set-up were enough to make the premiere great. What set this episode apart from all others was the glorious tribute the writers gifted fans of the Hawaii Five-0 franchise, and we mean the original Five-O.Â Nearly dying has affected Steve, no matter how much he’ll downplay it. While recovering in the hospital, he meets a former cop in the hospital chapel. Now if you had to do a double-take upon seeing just who that cop was, you’re not the only one. No, you weren’t hallucinating. Using the tricks of Hollywood, the writers brought the original Steve McGarrett, the late Jack Lord, back to life! What an amazing gift to the fans to bring the two characters together! Seriously, if you were a fan of the original series, this scene had to bring tears to your eyes. In this conversation, Lord’s spirit returns to talk to the modern McGarrett about love. As Steve starts to wonder if the job has taken away more than it has given his life, this familiar stranger offers him lasting advice. “What we do can’t be quantified. Your worth is measured in the closure you bring, the people you save. That’s your real legacy. The best legacy a man can leave behind is the people whose lives he’s changed. Trust me.” We do Jack Lord. You are missed.

Do you agree that the action and emotion put in this episode was some of the best work the show has done?